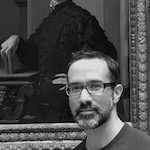 Joseph M. Silva received his Ph.D. in the History of Art and Architecture from Brown University.  He earned his M.A. in the History of Italian Renaissance Art at Syracuse University in Florence, Italy, where he was a Florence Graduate Fellow, and his B.A. at Wheaton College in Norton, Massachusetts.  While attending Brown, he held a Newberry Library Fellowship (Chicago, IL) and an Andrew W. Mellon Curatorial Proctorship in the Department of Prints, Drawings and Photographs at the Museum of the Rhode Island School of Design.  Professor Silva has also taught courses in Art History at Providence College, Rhode Island College, Roger Williams University and the University of Massachusetts, Dartmouth and lectured on art and architecture throughout Italy.  In addition to his career in academia, he worked for the luxury goods firms Prada and Hermès of Paris in visual display and merchandising.  He also serves as the director of the Flanagan Art Gallery at CCRI.

Joseph Silva's research examines the visual programs that promoted, historicized and mythologized the Holy Order of Santo Stefano and its founder, Grand Duke Cosimo I de'Medici of Tuscany, Italy.  These early-modern crusaders "defended" Christendom from the expanding presence of Muslim privateers and the Ottoman Empire in the Mediterranean Sea.  He is particularly interested in the interpretation/reception of Islamic material culture displayed within the context of Christian sacred space in grand ducal Tuscany.  His findings have been presented at the Southeastern College Art Conference (SECAC) and the annual conference of the Renaissance Society of America (RSA).