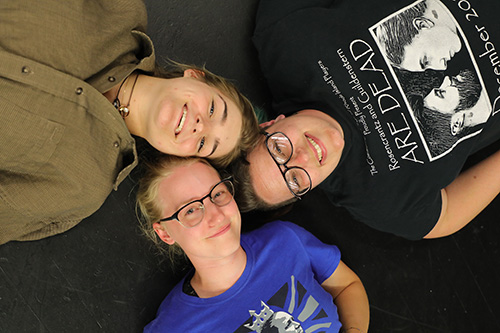 The annual Summer Rep program offers students the opportunity to stage two classic Shakespeare works in a professional setting. Under the direction of CCRI Theatre program coordinator Theodore Clement and adjunct professor Kira Hawkridge, students design and produce two shows in six weeks, which, Clement says, replicates the environment of “summer stock theatre,” which has traditionally been a launching point for the careers of young theater enthusiasts.

“The Tempest,” a comedy about a shipwrecked crew stranded on a magical island, runs from Thursday, July 18 to Saturday, July 20 with performances each night at 7:30, concluding with a 2 p.m. matinee Sunday, July 21.

The 2019 season closes with a performance of “Henry V” from Thursday, Aug. 8 to Saturday, Aug. 10 at 7:30 p.m., followed by a 2 p.m. matinee Sunday, Aug. 11. One of Shakespeare’s most well-known history plays, “Henry V” focuses on the trials and tribulations of the famous King of England during the Hundred Years’ War between 1337 and 1453.

“CCRI Summer Repertory allows the participants to collaborate on all levels of the theatrical process,” Clement said. “Motivated theatre artists are able to experience the full spectrum of creative opportunities that exist in the production of a play.”

Participants benefit from conducting workshops and networking with local theater artists, including Hawkridge, a director and movement specialist who founded the OUT LOUD Theatre in Providence, RI, and stage combat master Jim Beauregard, who choreographed the battle scenes in “Henry V.”

“The build-up is exciting and it gets particularly exciting toward the end of the process when you get to see everything you’ve put together in a short amount of time. It’s a beautiful thing,” said CCRI student and Cranston, RI, native Julia Egan, who appears in both plays.

In addition to acting, Egan assists as a theatrical technician. She is one of several performers assuming multiple roles, which is a necessity when producing two shows in a six-week span. Fellow student, CCRI Players president and East Providence, RI, native Kyle Renee started out as the stage manager during the Summer Rep’s inaugural season in 2017 and has also acted while handling scenic design and production responsibilities. Renee is producing both shows this summer.

“Typically, in theater, you get cast months before you start rehearsal,” Renee said. “You have the script, you have your lines – you have all of that – but with [Summer Rep], auditions are held in the last week of June and we have our call-backs on a Saturday. By the following Monday, we start rehearsals. It can be challenging, but it’s excellent real-world experience and it’s a really well-rounded program.”

In an effort to connect with the Rhode Island theater community while showcasing CCRI’s Performance Arts Department, Summer Repertory auditions are open to the public, allowing the college to draw performers of all ages. Similar to years past, the 2019 cast feature a mix of current CCRI students and high school theater hopefuls, including several from the Jacqueline M. Walsh School for the Performing and Visual Arts in Pawtucket, RI. Other high school students have performed in Summer Rep while enrolled at CCRI through the college’s Running Start program.

“When I first joined Summer Rep, I felt very out of place being one of the few cast members still in high school, but that feeling quickly changed due to how accepting and supportive everyone around me was,” said Pawtucket native and JMW senior Sydni Furtado, who appears in both performances this summer and is also the costume designer.

“I cannot wait to work with everyone again next summer. It was a great experience and I will recommend this program to everyone I know.”