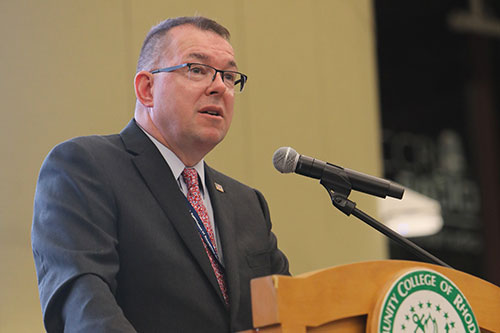 This year’s theme, appropriately, was “Rhode To Recovery,” a commitment to resiliency and the ability of a community to pick up the pieces quickly in the aftermath of a disaster such as a tornado, earthquake, or – more specific to Rhode Island and the northeast – a hurricane or flood.

With professionals from local and state emergency agencies, police and fire officials, and others whom work in emergency preparedness and disaster recovery  in attendance networking with students from CCRI’s Emergency Management & Homeland Security program, the conference provided a forum for brainstorming and sharing ideas on how to improve disaster recovery and better assist the community.

Participants also had the opportunity to branch off into two separate breakout sessions covering a variety of topics from crowdsourcing for situational awareness to understanding the realities of psychological trauma during and after a crisis.

The idea to incorporate recovery into this year’s theme, Gaynor said, stems from the fact it’s often an overlooked aspect in dealing with a disaster.

“I think, naturally, emergency management programs focus on response because that’s what happens first and that’s how you really get graded in the short term,” said Gaynor, the former director of the RIEMA who was promoted to lead the federal level in March.

“Once that’s over, though, and you have a major disaster, or a disaster that affects your community, recovery is more complicated. It can be drawn out, there are a lot of rules you have to abide by, and it can be messy. It easily becomes an afterthought for communities, so you have to invest in a recovery program because recovery is more than just emergency management.”

According to CCRI emergency management professor Joe Arsenault, recovery takes longer than the initial response, and several cities and towns in the United States are still dealing with the aftermath of disasters that happened more than a year ago.

“Texas is still recovering from Hurricane Harvey; some spots in New Orleans are still recovering from Hurricane Katrina; and Puerto Rico will be in the recovery stage for a long time," Arsenault said. “By pulling all of these different agencies and sectors together, it’s an opportunity for us as emergency responders to be better prepared for both disasters and recoveries.”

Joseph Bucci, a Highway Maintenance Operations Engineer for the R.I. Department of Transportation, noted that the response to a disaster is “relatively short-term, but the recovery can go on for a long, long time.”

“We have our role in emergency response and everyone that’s here has a role, so when you bring them all together it’s a chance to see how everybody interacts with one another and how to improve the cooperation among agencies,” Bucci said.

The networking among professionals is a major theme of the conference, especially those working on the frontlines during a disaster. The opportunity to put a face to the name or correspond with someone from an agency that may work hand-in-hand with yours in a real-life scenario is important, Arsenault said, “because it’s always better to exchange a business card at a conference than during a disaster.”

“The nice thing about it, too,” said CCRI student and American Red Cross volunteer Derek Jordan, “is you get subject-matter experts from all over the country that come in and show us what they’re doing and then we can compare and contrast, decide what would work for us, then add new components onto a program.”

“I always learn some great, new outcome technologies, meet new people that are in the field, and build those relationships with people while finding out some of the best practices they’ve been using,” he said.

“It’s an ever-changing field. Some of the stuff, naturally, is kind of standardized and stays the same, but there are always new and innovative technologies coming out that make things move along.”

During his keynote address, Gaynor referenced new methods to assist in recovery efforts while continuing to emphasize the importance of improving the overall effectiveness of the initial response in a disaster scenario. For example, Gaynor said, more than 2,000 communities in the United States still do not use IPAWS, the nation’s public alert and warning infrastructure, which helped save lives during the 2018 California wildfires.

Like many of her peers, CCRI’s Emergency Management Club president Catherine Jay wants to save the world, but plans to “start with Rhode Island,” a reference to Gaynor’s emphasis on how effective response and recovery starts locally before it reaches the federal level. Thursday’s conference offered students and emergency professionals a unique opportunity to learn new ideas and meet face-to-face with some of the top experts in their field.

“This is an excellent opportunity for networking,” said emergency management student Maggie Quillen. “CCRI has done a great job presenting this program through the region and hopefully it gets some national recognition. You have to learn how to deal with people and their problems and expectations and this is a great way to do it. We have people here who serve the community and also people who need the community to serve them, so it works well.”