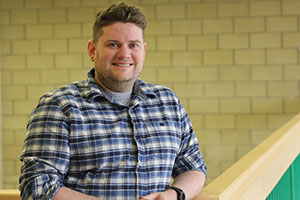 All Michael Wynn needed was a safe, educational environment – a home away from home where he could let his guard down, be himself and flourish.

A product of the state’s foster care system, Wynn found his voice at the Community College of Rhode Island, transitioning from a shy, withdrawn student to an outgoing, charismatic advocate among his peers, eventually serving as the Student Government president at CCRI’s Liston Campus in Providence.

Wynn, who graduates this month, will cap his remarkable journey when he addresses his fellow graduates as the student speaker at CCRI’s 54th commencement ceremony at The Dunkin’ Donuts Center.

“It’s a huge honor and, honestly, a little surprising,” he said, “but it’s a major responsibility for sure, one that I’m taking very seriously.”

Wynn always knew he’d get to this point but wasn’t quite sure what road he’d travel. Trouble at home forced him into state custody at a young age. He bounced from one foster family to another until he turned 8. Wynn spent a major portion of his childhood living with what he described as a “loving” family, but eventually ended up back in foster care when things didn’t work out. He moved so many times and lived in so many different cities, he often lost count.

Some of the homes were perfect, Wynn said, until the family decided the living arrangements were not a good fit, forcing him to either move back into a group home or live with a new set of foster parents. Social workers sometimes had to intervene to rescue him from potentially life-threatening situations. The constant relocating also made it difficult for him to adjust academically.

“That’s a big part of foster care,” Wynn said. “There’s no settling down. You’re constantly moving, constantly being put in a new home. You’re always prepared to pack. You just put your belongings in trash bags. That’s the mentality you have.”

Children in Rhode Island are now allowed to stay in foster care until age 21, but under the legislation in place at the time, Wynn would’ve aged out of the system by 18 and been forced to live on his own. He decided to run away from his last group home at 17. He had already earned his GED® credential and survived the next decade moving from city to city – New York and Los Angeles, included – working random jobs that didn’t require a long-term commitment, allowing him to move again at a moment’s notice.

Throughout this unpredictable journey, he had a small support system back in Rhode Island – mostly members of his adoptive family – whom he could call on whenever he needed someone to talk to. They, along with others, encouraged Wynn to return to school and pursue a career in social work, knowing his experience in foster care would make him more relatable to children in similar situations.

Wynn realized he needed a long-term plan, so he enrolled at CCRI and in the Joint Admissions Agreement (JAA) program. He eventually became involved with student government, and from there, he said, “the floodgates opened.” Wynn will graduate with his associate degree and continue his studies in social work this fall at Rhode Island College.

“Being involved in so much made the whole experience a lot better,” Wynn said. “I got to meet a lot of students and get to know some of the faculty. Before I got involved, I was a shy person. After a while, I felt like it was part of my responsibility.”

As a social worker, Wynn hopes to initiate changes within the foster care system to make the transition into adulthood easier for the thousands of children under state care.

“There needs to be more of a guidance system, maybe a person dedicated to helping others learn to live on their own, pay bills,” Wynn said. “I feel as you get older, that support tends to no longer be there. I left state care and fended for myself. I grew up under my own learning curve. One of the things I’ve learned is the importance of community and having a system of people who can rally around you.”

With a little nudge from others, Wynn turned his life around and blossomed at CCRI. Walking the commencement stage is just the beginning of what he hopes will be a lifetime of helping those who’ve been in his shoes.

“I have a unique experience that will be an asset in this field,” Wynn said. “I’m able to relate to them in ways a lot of people can’t.”