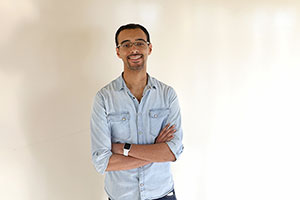 In one of his final conversations with his grandfather, Davaughn Snead-Hooks promised he’d become the first grandchild in the family to graduate college.

“Nine times out of 10, we would talk about my education,” he said. “It was always his focus.”

Hooks’ unconventional journey featured its share of obstacles along the way, but the 22-year-old Providence native will fulfill his promise when he finally walks the stage at the Community College of Rhode Island’s 54th commencement ceremony at The Dunkin’ Donuts Center.

Though his grandfather won’t get to experience the moment – he died in October – Hooks takes solace in the fact he never quit despite a humbling, three-year journey plagued by medical problems that almost forced him to walk away on several occasions.

Hooks breezed through his academics in high school at the Times 2 Academy in Providence, registering a 4.0 GPA as a freshman and sophomore until he suffered his first grand mal seizure at the age of 15. As a child who rarely got sick growing up – “I never had a cold, the flu, nothing,” he said – Hooks didn’t understand what was wrong or why this was happening.

Several trips to neurologists failed to yield a diagnosis. Meanwhile, the seizures continued. Some were so severe they caused Hooks to “scream out in agony” from the pain. The unexpected turn of events also caused his grades to slip. Finally, after Hooks suffered a seizure at home that left him foaming at the mouth, doctors diagnosed him with epilepsy.

Hooks eventually graduated Times 2 Academy with a 3.7 GPA and received a full scholarship to attend Johnson & Wales University, but his problems only worsened. He enjoyed college – perhaps too much, by his own admission – and could never strike the right balance between life in and out of the classroom.

The seizures continued, too, even with medication, and when he fell behind on schoolwork, he tried to study harder to catch up. The added stress and fatigue just led to more seizures, an endless cycle that ultimately forced him to leave JWU after one trimester.

His grandfather nudged him toward CCRI, and his decision to enroll ultimately set him on the right path. He met with Allison Robinson, coordinator of Disability Services for Students at CCRI, and she helped him manage his epilepsy while working with his professors to ensure he’d be given every opportunity to succeed. When he fell behind, which occurred often because of seizures that forced him back into the hospital for long stretches, professors gave him extra time to complete his work.

“Allison has helped me more than I can ever thank her for,” he said.

Hooks matured during his time at CCRI, and as his confidence grew, he become more involved with student life on campus. He worked as an illustrator and editor for the school newspaper, The Unfiltered Lens, and participated in a panel study at CCRI as an advocate for students with disabilities.

Through the help of a vagus nerve stimulator – a generator surgically implanted in his chest to help lessen the severity of his seizures – he now suffers far fewer effects from epilepsy.

He will graduate with an associate degree in Business Administration and transfer to Rhode Island College to study marketing and accounting. While his grandfather won’t be there to see him walk across the stage at commencement, receiving a diploma after everything he’s been through will be a “rewarding” experience, Hooks said.

Attending CCRI helped him realize he didn’t have to be defined by his disability. He learned to face his fears and overcome the obstacles that derailed him at a younger age, all of which has prepared him for life’s next great challenge.

“I gained so much experience and confidence from being at CCRI,” Hooks said. “A lot of people asked me, ‘Why a two-year college?’ Sometimes it’s better to prepare yourself for what lies ahead. It took me my first year here to realize it. I think that’s what my grandfather was trying to explain to me all along.”