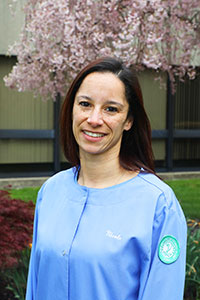 There were times Nicole Riley thought she’d never make it through college. She had tried twice already, leaving the University of Rhode Island after a year and a half and then taking another break after failing to get accepted into the Community College of Rhode Island’s nursing program.

The 38-year-old mother of two could’ve resigned herself to the life of a military wife holding down the household while her husband endured multiple deployments overseas, but she knew she was destined for something more.

Two decades after graduating from high school, Riley completes the first step of her journey when she receives her associate degree in Dental Hygiene at CCRI’s 54th commencement ceremony at The Dunkin’ Donuts Center. That’s only the beginning; the South Kingstown native is going back to school to study for her bachelor’s and perhaps a master’s degree to line up a potential management position down the road.

Until then, she’s basking in the achievement of not only finding a career she truly loves, but making it to the finish line at CCRI despite life’s many challenges. Coming out of high school, she enrolled at URI to pursue a career in elementary education. A year and a half later, she decided it wasn’t the right fit and left school, instead opting to take a few online classes here and there.

Several years later, she and her new husband moved to Maryland as he continued his career as a technical sergeant in the U.S. Air Force. He deployed for the first time in 2004. Two years later, Riley gave birth to the first of their two sons. Their second was born in 2007.

Through it all, Riley continued taking classes online, pursuing a potential career in criminal justice, but that was short-lived when the family moved back to Rhode Island in 2009. School took a backseat for the next two years as she worked per diem as a receptionist at Thundermist Health Center in Wakefield before enrolling at CCRI in 2011. Still searching for the right career, she decided to try nursing because her husband was home from deployment and traveling only occasionally for his primary job. She applied in 2013, but was not accepted.

“It turned out to be a blessing in disguise,” Riley said.

Later that year, her husband was deployed for the third time. While the situation was “unnerving,” technology made it much easier for the family to communicate while her husband was overseas – “Our youngest was starting kindergarten and we FaceTimed the first day of school while he was getting on the bus,” she said – unlike 2004 when all Riley could do was send emails and wait for a reply.

She remained at Thundermist but still wanted something more. Having worked in the dental field for several years – even transitioning to a dental assistant at one point – she realized she enjoyed her interactions with patients, at times comforting them as they prepared for a frightening procedure. Becoming a dental hygienist suddenly made perfect sense.

“I find that in hygiene, it’s just you and the patient,” she said. “You get to know them better and help them along the way. I enjoy that part of the job.”

With her husband’s blessing and support from family and friends, Riley returned to CCRI in 2016 to purse her new career path. CCRI offered her the flexibility of taking courses both at night and at CCRI’s satellite campus in Westerly, saving her a few extra trips north.

“It was just a matter of logistics and [CCRI] made it very easy for me to make going back to school a realistic option,” Riley said. “The dental hygiene program was full-time, so I had no choice. That made it even easier for me to go back and continue taking classes so I didn’t stop. My ultimate goal was to finish.”

Along the way, Riley made new friends who inspired her to continue her journey, including a cancer survivor who worked two jobs while attending full time and another who stuck with her studies despite a house fire and the loss of a close family member. Now, 20 years since her first try at college, Riley has a degree to her name and a true path to happiness in the workforce. She plans to transfer to Rhode Island College and continue her studies following her husband’s next deployment in July.

“It took me many years of trying and not succeeding,” Riley said, “but I continued to try new things to find what was the right fit for me. Getting this far makes the journey worth it.”