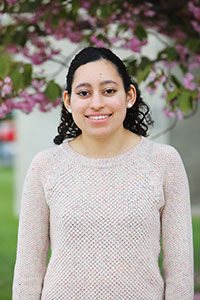 Alyze Brito had a lot of hopes and dreams coming out of high school – bright ideas she knew eventually would lead her down the path to success.

The only problem was figuring out how to get there. A hard worker by nature, Brito contemplated taking a year off after graduating Cranston West High School to save money for college tuition and map out her options, but the Rhode Island Promise Scholarship program at the Community College of Rhode Island provided her with the opportunity of a lifetime – free tuition to study and fulfill her ultimate dream of helping others.

“I would’ve been crazy to not take advantage of this,” she said.

Following a rigorous course load in her two years at CCRI, Brito becomes the first in her family to graduate from college this week – and with high honors – when she crosses the stage at the school’s 54th commencement ceremony at The Dunkin’ Donuts Center.

“I’m proud,” she said, “but, more importantly, I’m happy to be making a positive difference for my family.”

The opportunity to attend college and earn her associate degree pushed Brito to work harder than ever. The Cranston native worked two jobs while attending school full time, doubling as a pharmacy technician at Walgreens while working night shifts at Burger King. A typical day left with her little free time to socialize or catch her breath; she also took nighttime and online courses to keep up with her credits and even maintained a hectic schedule on off days, sometimes working until 3:30 p.m. at Walgreens before heading to Burger King for the start of her 4 p.m. shift.

While she wasn’t spending money on tuition, she was saving up for a new car. She finally got her license this semester after two years of using public transportation to get to and from work and school.

“Sometimes you have to work with what you have,” Brito said.

Her story exemplifies what happens to those who get an opportunity to wedge their foot in the door and strive for something greater. In Brito’s case, she burst through the door and began carving that once-elusive path to success. After dealing with anxiety at a young age, Brito learned to manage her time and focus solely on her studies without the burden of tuition payments hanging over her head.

At CCRI, she found her passion in helping others. She has contemplated teaching, but is more focused on psychology based on her inherent desire to explore how the human mind works. Brito is intuitive; aware of her surroundings and sympathetic to those who suffer from mental illness, her goal is to use her voice to assist those who cannot speak up or don’t know what to say. She joined CCRI’s Bible Study Club during her final semester, which she says helped her grow spiritually in addition to the intellectual growth she experienced over the last two years.

“I could take psychology for the rest of my life,” Brito said. “Mostly, it’s my love for people. I’m so interested in understanding people and why we are the way we are. I think connecting with others is important.”

Even with a busy schedule on and off campus, Brito found time to volunteer, participate in church events and tutor friends and classmates: “Anything I could do to help,” she said. Her natural instinct to step in when others won’t is what has finally allowed her to narrow down her choices in choosing a career.

She has always had an idea of what she wanted to do, but with a little nudge from her advisers at CCRI, she flourished in the classroom and found the perfect fit, none of which would have been possible without Rhode Island Promise.

Brito plans to transfer either to the University of Rhode Island or Brigham Young University to pursue her bachelor’s degree in psychology.

“For the most part, I’ve always been an observer. I’m careful about the things I do,” she said. “You see the position others are in and you don’t want that for yourself, so you become more cautious. I’ve just always been careful to think about what it is I really want. If you follow some kind of plan, it’s better than not having any plan at all. CCRI helped me find that path.”

Motivation was never an issue for issue for Brito. One way or another, she was going to find a way to get to where she needed to be. Like many of the Promise Scholars joining her at this year’s commencement ceremony, she simply needed the opportunity to get her foot in the door and find the right outlet for all her ideas and dreams.

“I wasn’t going to fail. I wouldn’t allow myself to,” she said. “That’s just my personality type.”