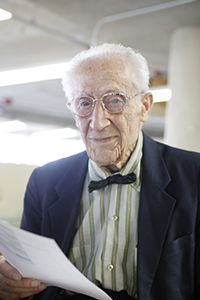 Known for his eclectic wardrobe and kind, gentle soul, Robert Moyerman – affectionately known as “Bowtie Bob” at the Community College of Rhode Island’s Knight Campus – had a unique way of becoming part of everyone’s family without offering too big a peek into his own personal life.

“He was the mayor of CCRI,” said bookstore clerk Tiffany Jones, who exchanged greetings with Moyerman almost every day on campus. “He was a people person. He liked encouraging people, helping them and educating them, and he would never really talk about himself.”

A U.S. Air Force veteran and retired chemist, Moyerman passed away last month at the age of 93, leaving behind an incomparable legacy that began during his days as a radio operator for the B-29 Superfortress bomber in World War II and continued later in life as a part-time student at CCRI for nearly three decades.

Born in Atlantic City, N.J., Moyerman joined the military in 1943 and served in WWII flying bomber jets over Japan, including the island of Iwo Jima, and eventually returned to Rutgers University after the war to earn a degree in chemistry in 1949.

Two years later, Moyerman earned his master’s from the University of Alabama and spent the next four decades working as a chemist. In 1965, he invented a fire suppression compound for Ansul, a manufacturer in Wisconsin, spent time at a company manufacturing atomic reactors, and also worked as a research specialist for the U.S. Navy. Moyerman moved several times during that span, working in Maryland, New Jersey, New York and Pennsylvania before settling in West Warwick, where he worked at an epoxy plant for 15 years before retiring in 1990.

By then, Moyerman had been married for 38 years to his wife, Shirley. Their three children, Judith, David and Maxine, were all either in their late 20s or mid-30s. Unable to stay inactive for too long and fueled by his lifelong desire to learn, the then 65-year-old Moyerman enrolled at CCRI shortly after retiring to begin taking computer courses.

A part-time student, he earned the first of his three certificates in 1994 in computer programming and became a fixture at the Knight Campus for 28 years, taking one course each semester and always finding a way to make it to class regardless of his circumstances. An avid runner who participated annually in the South County Run for Fun, Moyerman developed personal relationships with faculty members throughout the campus, stopping along the way to say hello, share a story or simply lend an ear. A sharp dresser, Moyerman always arrived in a sport jacket and trademark bowtie, thus earning the nickname that stuck with him through the years.

“He would come to my desk every morning since 1992,” said Donna Scattone, who works as an Information Services Technician in Computer Studies. “He would get free greeting cards in the mail, sympathy cards, birthday cards, and ask me if I needed any. I still have some in the top drawer of my desk.

“Everybody knew him,” she continued. “He was just very kind to everybody and wanted to be a part of everybody’s life, but he didn’t dig too much.  He really touched a lot of people here.”

Moyerman’s oldest daughter, Maxine, died tragically in 1996 at the age of 43 and his wife passed away a year later. Still, “Bowtie Bob” continued to take courses and earned two additional certificates, one for Computer Networking in 2001 and another in Lean Manufacturing three years later.

As a WWII vet, he also spent time at CCRI’s Veterans Services office during his last few years on campus, sharing stories with fellow student veterans, several of whom helped Moyerman get to and from campus once he could no longer drive. Moyerman’s neighbor, Robin Donnelly, a Human Services Coordinator at CCRI, also began driving him to campus so he could continue taking classes until his final semester in 2018.

“When you saw him, he would smile and you would smile back,” said Deborah Holmes, an Administrative Assistant in Enrollment Services at CCRI. “It was amazing to me that a man of his knowledge still wanted to keep up on things. I think he wanted to keep his mind sharp.

“He would just get his coffee each morning, sit down and chat with the student veterans. They really cared for him, too. He was awesome. There are no words to describe him. I’m glad I knew him.”

The irony, Scattone said, is Moyerman knew almost everyone on campus, but few knew of his military background or his relationship with his children and great grandchildren. He was incredibly generous and outgoing, but also private; he rarely spoke about his wife, though Scattone knew he missed her, even more than a decade after she passed away.

“He had been by himself for a long time,” Scattone said, “but he didn’t let his guard down. He was very lonely. After a while, we were his family.”

Even in his late 80s, Moyerman continued to run, sometimes more than seven miles a day just to stay active, and his thirst for knowledge never waned. A husband, father, and grandfather, he is best remembered as a remarkable chemist, a charismatic personality and a lifelong learner who inspired others.

“He’s a legend,” Jones said. “He was the most genuine, kind-hearted, amazing man. He would literally help anyone if he could.

“He was still running marathons at his age. And he would get up every morning and find a way here, whether it was to educate himself or help somebody. He was just the most amazing man.”