Two of CCRI adjunct instructor's films are on festival circuit 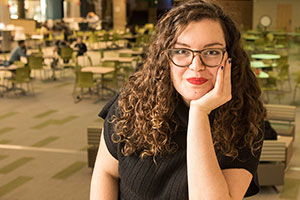 Adjunct instructor Ulya Aviral, who is here on a visa from Turkey, explores concepts such as identity and political unrest in her films, whose genre is best described as magical realism.

While studying filmmaking at Emerson College, adjunct Community College of Rhode Island instructor Ulya Aviral began work on two short films as part of her thesis. Both required extensive research, writing and, in some cases, crowdfunding to help launch each project.

Three and a half years later, Aviral wrote, directed and produced a pair of thought-provoking films that force viewers to wrap their mind around various concepts and often-uncomfortable talking points, whether it’s transgender rights, as broached in the film “Shut Your Eyes I’m Gonna Dance,” or political unrest on foreign soil, the backdrop of her 2018 release, “My Nature.”

The 27-year-old Aviral, a Turkish exchange student who moved to the United States in 2008, writes with a purpose. Her films, which range between 10 and 15 minutes in length and can be best described as magical realism – a genre in which realistic narratives are intertwined with surreal elements of dream or fantasy – are designed to convey a message or elicit empathy, while providing a voice for those who often go unheard.

“Shut Your Eyes I’m Gonna Dance” and “My Nature,” both of which are making their rounds on the film festival circuit, offer a glimpse into the creative mind of one of CCRI’s most intriguing professors, part of a diverse team spearheading the school’s new-look communication program.

Aviral has written three films, starting with “Colors Inside” in 2017, an official selection at Los Angeles Cine Fest and the Short to the Point international film festival in Romania and an award-winner for “Best Colors In A Short Film” at the So Free And Limitless film festival in Montreal.

“Shut Your Eyes I’m Gonna Dance” is screening at the Queer Kampala International Film Festival in Uganda and is an official selection at the 2018 Arizona Underground Film Festival. “My Nature” was featured in the Short Film Corner at the Cannes Film Festival in France and was a finalist at this year’s Boston Turkish Film Festival.

In addition to writing, producing and directing both films, Aviral also fundraised and solicited sponsors to help cover production costs, some of which came out of her own pocket. One sponsor, a nudist camp in Rhode Island, offered a location for an exterior shot in “Shut Your Eyes I’m Gonna Dance,” while another provided the cast and crew with food and refreshments for each day of filming.

Additional money raised paid for the set, a circular artificial garden that Aviral designed herself and built with the help of her production team over the course of five days. In the film, a transgender man is trapped in the garden alongside his female alter ego, both exploring their gender identities to liberate themselves. The surreal setting and imagery highlight the numerous issues transgender individuals face, from overwhelming stress and depression to widespread misidentification in mass media and pop culture.

“My Nature” follows a fictional woman crawling through underground tunnels to escape war in the Middle East before stumbling upon a mysterious path where she relives her past in a secret language. Aviral traveled back to Turkey to further research her homeland before writing the script and then returned a year later to begin filming; it was a two-year process in its entirety.

“The audience may emotionally connect with a film and its characters because of empathy and relatability,” Aviral said. “This helps people put themselves in the shoes of others and have understanding toward someone new or different.”

In additional to touching on social issues, Aviral also draws from personal experiences in her writing. “Shut Your Eyes I’m Gonna Dance” is loosely based on her best friend from college, who came out as transgender, while “My Nature” is based on the sobering reality of those affected by war, whether directly or indirectly.

“I have not been a refugee or escaped a war. I have been very lucky with this, but I know people who have to go through these things or who have been personally affected by attacks in the country and it’s just very important to me because it’s touching home,” Aviral said.

“Coming from Turkey, it’s inevitable to interact or witness or see some kind of war or aftermath of war in your life.”

Writing and storytelling has always been Aviral’s passion. Shortly after arriving in the United States more than a decade ago, she attended the University of Minnesota Twin Cities, where she initially studied sociology. After taking a class in film analysis – a “mind-blowing” experience, she recalls – Aviral decided to declare a second major in film studies. She earned her bachelor’s from Minnesota in both sociology and studies in cinema and media culture and then enrolled at Emerson to pursue her Master of Fine Arts in film and media art.

Aviral teaches Mass Media Foundations at CCRI’s Flanagan Campus and Oral Communication at the Knight Campus. She also teaches Writing for the Screen at the Rhode Island School of Design in addition to hosting a creative workshop at GrubStreet in Boston, a nonprofit creative writing center and support system offering classes to students of all skill levels and ages.

“I focus on giving voices to people or individuals who’ve been marginalized,” Aviral said, “and I also talk about a lot of things such as immigration, social justice, diversity and how to authentically represent an identity as a character in media, whether it’s literature or film or even a song.”

When she’s not busy with her work in the classroom, Aviral is working on her latest screenplay – this time a full-length feature film – in addition to a music video in post-production about a fictional female protagonist fighting against hatred and prejudice in the form of energy.

Her visa expires in February, so Aviral is seeking another work permit to remain in the United States, where she is most comfortable pursuing her career in filmmaking. CCRI has provided her with a platform to teach others while continuing to develop stories and screenplays that not only inspire, but perhaps one day encourage social change.