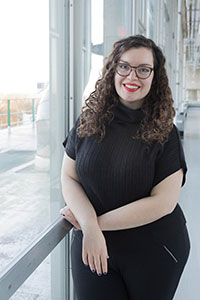 Community College of Rhode Island adjunct instructor and filmmaker Ulya Aviral, a Turkish exchange student who moved to the United States in 2008, will screen two of her films this month at the Knight Campus in Warwick.

Aviral, 27, writes with a purpose. Her films, which range between 10 and 15 minutes in length and can be best described as magical realism – a genre in which realistic narratives are intertwined with surreal elements of dream or fantasy – are designed to convey a message or elicit empathy, while providing a voice for those who often go unheard.

“Shut Your Eyes I’m Gonna Dance” is screening at the Queer Kampala International Film Festival in Uganda and is an official selection at the 2018 Arizona Underground Film Festival. In the film, a transgender man is trapped in the garden alongside his female alter ego, both exploring their gender identities to liberate themselves. The surreal setting and imagery highlight the numerous issues transgender individuals face, from overwhelming stress and depression to widespread misidentification in mass media and pop culture. The film is rated R.

“My Nature,” which was featured in the Short Film Corner at the Cannes Film Festival in France and was a finalist at this year’s Boston Turkish Film Festival, follows a fictional woman crawling through underground tunnels to escape war in the Middle East before stumbling upon a mysterious path where she relives her past in a secret language. Aviral traveled back to Turkey to further research her homeland before writing the script and then returned a year later to begin filming; it was a two-year process in its entirety.

In additional to touching on social issues, Aviral also draws from personal experiences in her writing. “Shut Your Eyes I’m Gonna Dance” is loosely based on her best friend from college who came out as transgender, while “My Nature” is based on the sobering reality of those affected by war, whether directly or indirectly.

“Coming from Turkey, it’s inevitable to interact or witness or see some kind of war or aftermath of war in your life,” she said.

Writing and storytelling has always been Aviral’s passion. Shortly after arriving in the United States more than a decade ago, she attended the University of Minnesota Twin Cities, where she earned bachelor’s degrees in sociology and studies in cinema and media culture and then enrolled at Emerson College to pursue her Master of Fine Arts in film and media art.

When she’s not busy in the classroom, Aviral is working on her latest screenplay – this time a full-length feature film – in addition to a music video in post-production about a fictional female protagonist fighting against hatred and prejudice in the form of energy.