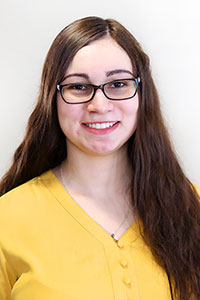 She will be recognized at the honor society’s Presidents Breakfast held during the American Association of Community College’s Annual Convention Monday, April 15, in Orlando, Florida, and was recognized last week at PTK Catalyst 2019, the organization’s annual international convention, where she carried the Rhode Island flag during the opening session.

Selection was based on the score earned in the All-USA Academic Team competition, for which more than 2,000 applications were received this year. Nominations were evaluated on academic achievement, leadership, service and significant endeavors. Vallette who has been president of the college’s chapter of the PTK honor society since December, received the highest score in Rhode Island.

“Alicia’s work to increase engagement and participation and to raise the visibility of the chapter is impressive. She has planned PTK Awareness Day and Founders Day events, participated in our recent GradFest for the Class of 2019 and conducted a drive for our newly opened CCRI Food Pantry,” said CCRI President Meghan Hughes. “We are proud of her hard work both in and out of the classroom. She is so deserving of this scholarship and recognition, and we thank her for her service to our college and her fellow students.”

Vallette has a 3.9 GPA and is majoring in science, focusing in geology and oceanography, and plans to earn her bachelor’s, master’s and doctoral degrees, perhaps in atmospheric science.

“I’ve always loved meteorology and weather and how it affects local life,” she said. Her grandfather had a house on the water and she began noticing how the tides affected their fishing trips as young as 7 years old.

Vallette, 21, began taking classes in summer 2017. “I’ve been so impressed by the caliber of the academic programs and of the people here at CCRI. It’s been such an awesome opportunity for me,” she said.

“I was an introvert and I was out of my comfort zone. But I’ve found so many interesting classes and incredible professors at CCRI. I’ve grown so much since I started here, especially since getting involved with PTK,” she said. “College can be lonely and more difficult if you’re not going at it with other people. Just having people around you who can relate to what you’re going through and being a part of a community is so much more enriching.”

She wants to be a connection point for students and has compiled a binder of on-campus resources such as counseling, choosing a career and veterans’ services. “Some students don’t realize all of the resources that are available here, and I advocate on behalf of those who aren’t comfortable advocating for themselves.”

Vallette recently participated in CCRI’s Emerging Leaders program, which helps students enhance their leadership skills and network with alumni, and called the experience inspiring. She is also a senator in CCRI’s Student Government, serves on the Student Union Committee and is the Knight Campus representative on the college’s Student Advisory Committee. In March, she presented about increasing student engagement at the PTK New England Region Spring 2019 Conference at Asnuntuck Community College in Enfield, Connecticut.

“I’ve been learning as I go, and I’ve grown quite a bit as a both a leader and a scholar. I’m more diverse and adaptive. If there’s something I don’t know, I have to figure it out and come up with an alternate solution. It’s great preparation for a career,” she said.

“I’m invested in CCRI and it’s my goal to make it even better for the next generation coming in. As a nontraditional student, I was terrified when I first started to take classes, so if I can make that journey easier for others, that’s what I want to do,” she said. “After attending PTK Catalyst 2019 last week, I am more energized than ever to continue as a student leader on campus, to help grow my chapter and to work with other chapters throughout the New England region.”

The New Century Transfer Pathway Scholar program is sponsored by the Coca-Cola Foundation and the Coca-Cola Scholars Foundation, with additional support provided by the American Association of Community Colleges and PTK.