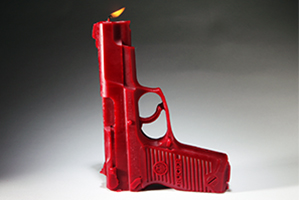 This candle gun sculpture, created as part of the “One Gun Gone” project, was inspired by the sidewalk shrines that appear when someone has been killed on the street because of gun violence.

After four of his students died from gun violence over 15 years, artist and educator Scott Lapham legally purchased a used handgun and began a project with his students – making and selling art from a mold of that gun to raise funds to get more guns off the street.

“I wanted to have a project that was produced by students who are living in urban neighborhoods and underserved communities,” said Lapham. “I wanted to create a positive response to gun violence to give the students who are involved an opportunity to develop a voice. A lot of them know about gun violence and know where they can get a gun, they just try to stay away. They don’t feel like they can talk about it and I find that problematic. I tried to find a space where they can say ‘I don’t think it’s OK in my community.’”

“One Gun Gone” began three years ago when Lapham hired an artist to make a mold of the weapon he purchased, which his students never saw or touched. From that mold, they made four different types of sculpture. Proceeds from the sale of the art will fund a gun buyback in coordination with the Rhode Island State Police and Providence Police next year. 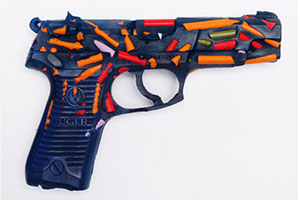 For the exhibition at CCRI, Lapham worked with students at three high schools – Westerly High School, Rocky Hill School and Dr. Jorge Alvarez High School in Providence – as well as with professional artists. Each was given a crayon gun sculpture.

“I’m excited to have all kinds of students in the room at the opening, in addition to adult professional artists who are working with the same materials to start with,” he said.

Students in teams of three to five transformed the crayon gun sculptures into statements about gun violence. Some melted them down, others drew with them, he said. Visitors to the exhibition will see photos, sculpture, drawings, 2-D and 3-D work, “all with a starting point literally inspired by one gun taken out of commission.”

Lapham spoke of some of the young victims of gun violence who inspired this project. He called the first an exemplary student. “He was smart, and he was actually working to change his life in most positive ways you could imagine, being really thoughtful about his life.”

He was 15. “When you’re in high school, you’re not thinking you’re going to die from being shot,” Lapham said. He had an argument that he thought had blown over. “He went get a sandwich at a truck, and he got shot. It was a shock to me, the other staff and to our students.”

Another: “He was dating a girl and her brother didn’t like it and he got shot. It wasn’t anything deeper than that. Access to guns leads to unwarranted death.”

And another: “He was smart, athletic, handsome – all things that people would ascribe to, if he was born in another neighborhood, with another skin color, someone on the path to success. But he got shot and died, and it was really circumstantial.”

Gun violence is an epidemic in our country and has been for decades, Lapham said, but it’s getting more attention in recent years. “Guns in suburban school settings make news. But in urban environments, it’s in the streets, not the schools,” he said.

“We are very fortunate in Rhode Island to have, per capita, very few deaths to gun violence in comparison to other cities of similar size and demographics,” he said. But for every person you hear of who dies from gun violence, “there are many, many shots fired. When that happens, kids don’t go out to play.”

It’s a quality of life issue and a public health issue, he said – and not just a physical one. “There’s a psychological health cost as well. It’s a stressor, and multiple stressors affect children’s ability to learn. And there’s a trajectory that affects not just those who are shot, but families and communities.”

Lapham is more than 60 percent of the way to his art sales fundraising goal of $5,000 for the buyback, which he hopes will be held in late spring or early summer 2019.

“We will accept legal and illegal guns brought to us by those who don’t want them or who want the money more,” he said. “There’s a lot of gun violence in urban areas so this is symbolic. Whether we buy back five or two dozen, it’s a success. Some say it’s a grain of sand or a drop in the bucket; that statistically it doesn’t mean much. But it will be our grain of sand. It matters. We want to say we don’t believe there should be gun violence in our communities.”

Lapham said he is excited to bring this work to CCRI, noting some of his students now attend classes here. In addition to the gun sculpture art, the project will sell T-shirts and posters to benefit the gun buyback.

“It’s difficult artwork. Someone might want to support us but you might not want have something that looks like a gun in your house,” he said.

He said none of the members of One Gun Gone has a crayon gun, in case it’s mistaken for a real firearm. “It’s dangerous in a community where people get shot and die. We don’t take it lightly. We’re very aware that these are strong objects, items of emotion.”

And where is the original gun he purchased? “It still exists, locked up.” Lapham said he will find a creative way to decommission it once the project is done.