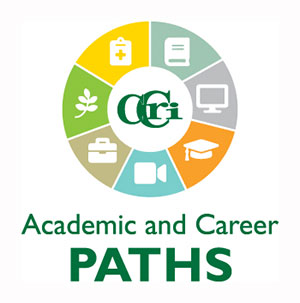 Whether they have a clear goal in mind or are still trying to find the perfect fit, Community College of Rhode Island students now have a program in place to make sure they get the most out of their academic experience from start to finish.

CCRI has launched an Academic and Career Paths initiative designed to steer students in the right direction based on their career interests, or perhaps even their dream job, by ensuring they enroll in the right program, take the appropriate courses, and complete their degree without wasting time and money.

CCRI offers more than 110 associate degree programs, all of which fall under one of the seven available paths. The alternative of choosing from among seven paths rather than picking from more than 100 degree options is designed to be less overwhelming for incoming students.

Once a student chooses a path, his or her schedule over the next four semesters will be mapped out from general education courses to prerequisites, most importantly in the proper sequence.

Knowing your major from the get-go is not a requirement; even if you are undecided for the first semester or two, the curriculum is designed so that the majority of classes you take will count toward your degree. This prevents students from loading their schedule with classes they don’t need or, worst-case scenario, classes they can’t apply to a certain major.

Freshman Gillian Authelet of Coventry is wavering between education and social sciences as her field of study. Because both fall under the Education, Government and Human Services path, whatever classes she takes now will be applicable once she zeroes in on a major. It’s a more practical approach to choosing a course load than picking classes without the proper guidance.

“With everything in the same path, it’s a lot less overwhelming,” Authelet said. “I like it.”

Freshman Britney Anderson of West Greenwich is undecided on a major, but enjoys reading and studying mythology and history in her spare time. She is also a member of CCRI’s Anime Club. The Academic and Career Paths program allows her to take a process of elimination approach toward weeding out the paths she’s not interested in and focusing more on what she enjoys, perhaps guiding her toward the Arts and Humanities path.

“I’ve never had any idea where to look,” Anderson said. “With this, I know what I want and don’t want and I don’t have to focus right away on one thing.”

Students who do know their major also benefit from the program. Freshman Nathan Segar of Hopkinton wants to major in chemical engineering, but is uncertain where to begin. The Academic and Career Paths program eliminates that burden.

“I have that title, yes, but I need to figure out which classes to take,” he said. “Right now, I’m kind of going through the motions, but I really need to know where to direct myself to get the degree.”

The paths are wide-ranging; those who choose the Education, Government and Human Services path can major in anything from education, fire science and social services to sociology and political studies. The initiative also applies to those who want to transfer.

A student enrolled in the Joint Admissions Agreement program with the intent to earn a bachelor’s degree in marine biology at the University of Rhode Island will choose the Environment and Sustainability path at CCRI, take the proper courses in the proper order and transfer after two years.

Students won’t be discouraged from changing their minds, either. Even if after one semester they decide to segue from fine arts to something on the opposite end of the spectrum such as legal studies, certain courses will still carry over. The ones that don’t can fill their general education or elective requirements.

“The paths are essentially clusters of programs, with the idea being that if the student comes in and they’re not quite sure what they want to do, we can help them plan out a four-semester sequence,” said Sandra Luzzi Sneesby, CCRI’s interim director of special projects. “It’ll also be easier for students who know what they want to do. If you know you want to be a nurse, you’re going to pick the health path. It’s easy. But suppose you don’t know. That’s where this model is most helpful. We want you to find what you’re passionate about.”

Freshman E.J. Butler of Richmond, who works as a chef at Belmont Market while taking courses at the Knight Campus, is focused on culinary arts, but also has an eye on communication based on his work with the National Multiple Sclerosis Society. His mother has MS, so Butler assists at various local events. He would be more inclined to follow the Communications, Media and Film path knowing he’d be placed in the right courses from the beginning and could still choose a different path if he ultimately changes his mind. “If I took it here and got a good understanding, I’d feel comfortable doing it,” he said.

The program, Sneesby said, is particularly beneficial for first generation college students – those who are the first in their family to attend college – who don’t have someone with experience to lean on for guidance.

“They come in, they try to self-guide, they may not make an appointment with an adviser, so they pick and choose and then they find out after a year, ‘I have all the wrong courses,’” Sneesby said. “Then they get frustrated and they drop out, or they go in and say, ‘I don’t know what I want to take,’ and they load up with gen eds, which discourages them, and they drop out.

“We want them to choose one of the seven. Even if they say, ‘I really don’t know,’ we’re going to strongly encourage them.”

The Academic and Career Paths initiative is also aimed at helping student completion rates. Two-year colleges are evaluated on their first-time, full-time graduation rates; in other words, students enrolling for the first time with a full-time course load.

“The national average at community colleges is 22 percent,” Sneesby said. “However, those colleges that have implemented this program at scale – and we’re just in the early stages – are seeing completions of 40 percent. It’s a huge jump. So we’re hopeful that we can do the same for our students.”

Assistant Mathematics Professor Aaron Schrank teaches four courses as part of CCRI’s Math Emporium aimed toward developmental education students looking to master the skills necessary for credit-bearing courses. The Emporium has three courses built into it with each providing access to different paths, so students aren’t locked into a particular area of study.

The feedback has been exceptional and Schrank finds the Academic and Career Paths program particularly helpful for those taking developmental education courses.

“The last thing they need is the pressure of navigating the complexities of college on their own,” Schrank said. “This provided them with a clear road map of what their math requirements would be in each scenario. Based on the students’ reactions, I could tell they were pleased with how structured the pathways were.”

A full breakdown of all seven paths is available online through CCRI’s Academic and Career Paths site, which also provides career data from the Bureau of Labor Statistics. Based on their field, students can get an idea of how much they’ll earn in the workforce with a two-year associate degree or a bachelor’s degree, perhaps encouraging them to continue their education beyond CCRI. They can also see where jobs in their field are available.

“It’s full disclosure,” Sneesby said. “The program strives to increase awareness about career choice. A college degree or credential is essential to future success. People are going to change their careers maybe four or five times in a lifetime, but you need to complete a degree in something.  And for those who intend to transfer to a four-year college to pursue a bachelor’s degree, statistics show if students completes the associate degree, it’s a strong indicator they are much more likely to complete their bachelor’s degree. We know that those with a college degree obtain a much higher wage than if they had no degree.”

The Academic and Career Paths initiative will keep students focused and motivated by providing them with a clear, concise path toward graduation in addition to raising completion rates at CCRI for first-time full-time students. Sneesby anticipates more two-year schools will begin implementing the pathways model in the near future because of the success it has had, and its ability to raise nationwide completion rates.

“We have a population least able to navigate college – they don’t have anyone in their family for reference and they have to kind of figure it out. I was one of those people,” she said. “I was first generation in my family to go to college and I remember the confusion, so I’m passionate about this work and helping give our students a clear path to their success.”