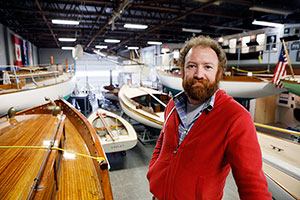 After sailing around the world for more than a decade, Joseph Waits settled in Rhode Island and enrolled at CCRI. He is graduating with a degree in Liberal Arts and a 4.0 GPA and will pursue a bachelor’s degree in screenwriting. View a video about him.

Joseph Waits sailed the world for more than a decade after graduating from high school, constantly putting his life on the line against the unpredictability of the open water, and yet he never felt more intimidated than he did the first time he stepped foot onto a college campus.

As a 30-year-old student who hadn’t taken classes in 12 years, Waits didn’t know what to expect when he enrolled at CCRI’s Newport County Campus, but the care and commitment from his professors combined with his unwavering work ethic made it a seamless transition for the South Carolina native.

The Class of 2018 graduate finishes his CCRI career with a degree in Liberal Arts and a 4.0 GPA and will pursue a degree as a screenwriter out West, where he hopes to transfer to the UCLA School of Theater, Film and Television.

“This is one of my proudest feelings right now,” Waits said. “I’ve worked with people who sail all the time, but I’m really proud of the fact I stepped away from a career and I pursued this to the best of my ability.”

Waits’ journey began on a whim. Following a heated argument with his mother, the 18-year-old decided it was time to skip town, so he hopped a Greyhound bus with $400 in his pocket and made the daylong trip to Key West.

“When I got down there, reality hit me quickly: ‘What are you going to do now?’” he said.

Waits began walking the docks along Duval Street, a well-known commercial area, when he happened upon the captain of a boat who needed some part-time help for an upcoming charter trip. He took the job as a deckhand, carrying out basic duties such as standing watch, cleaning and even sailing the boat, while sleeping on the porch of his boss’s house in a hammock for a few weeks until he saved up enough money to rent his own apartment.

The jobs kept pouring in. Waits “hit the lottery,” as he puts it, stumbling upon one great opportunity after another. The jobs varied, too, whether it was a private boat owner hiring a crew to sail his vessel from the British Virgin Islands to his home in San Francisco, or a sailing school in need of deckhands on a four-and-a-half-month journey from New York to Germany.

Waits sailed everywhere from Costa Rica to Acapulco, through the Panama Canal, Antarctica and the Northwest Passage, living out of a backpack for nearly a decade. He rarely had a permanent residence, instead hunkering down for a few months at a time in Alaska, South Korea, Italy, London or wherever his next journey took him.

“I just kept finding great opportunities that would land in my lap,” he said. “That Panama Canal trip, there are people who have sailed for 20, 30 years who haven’t had a chance to do a trip like that.”

Waits never punched a clock or logged a traditional 9-to-5 office shift, but had no trouble finding jobs regardless of the economy. During the 2007-08 global financial crisis, when professionals from all fields were laid off left and right, Waits was turning down jobs. He even had enough money saved up that he could pay his rent – wherever he was living at the time – a few months in advance just to take a trip to the Caribbean to race sailboats for six or seven weeks.

By 2013, Waits began finding more steady work in Newport and eventually took up a permanent residency in Rhode Island, but was growing increasingly frustrated with the sailing industry. He would turn down one job in lieu of another, and then that opportunity would fall through.

“I felt like I was spinning my wheels,” he said.

He had already accomplished his primary goal of visiting all seven continents before he turned 30 and completed every ocean race imaginable.

“I’ve been wanting to go to school for quite some time and, to be honest with you, I was kind of intimidated by the process. I had no idea,” Waits said. “Then one day I just went to the Newport campus.”

Waits enrolled in 2015, starting off with just three classes his first semester, then five the following year. He breezed through his curriculum and aced all his classes, forming a close relationship with the professors who helped guide him through the process following his long layoff from high school.

“I remember walking around thinking, ‘Everyone here is so young,’ but then I settled into things and everything was great,” he said. “The professors are amazing. That first semester I had Bo Allen for comp, I had Allison Petro for intro to film and I had Hossiri Godo-Solo for Spanish. I loved Bo Allen. Great sense of humor. Loved his class so much. I went on to take several classes with Professor Petro and Professor Godo-Solo – three each – and just developed a bond with them.”

Waits considered pursuing a degree in economics, but just couldn’t envision himself sitting behind a desk for the rest of his life, so after rediscovering his love for the film industry, he decided to venture into screenwriting.

Waits conquered many fears sailing the open water for more than a decade, encountering close calls and uncertainty along the way, yet his proudest moment will be walking the stage at this year’s commencement ceremony, proving anything is possible with the right attitude and the right people behind you.

“There have definitely been times where I’m like, ‘What am I doing here? I’m turning down jobs, making good money, going to cool places,’ and the professors here helped bring me back down and level me,” Waits said. “I’m glad I did it. I’m proud.”