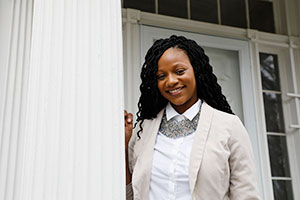 Sharaine Johnson, who is graduating with a certificate in Social Services, wants to use her life experiences to guide youths down a better path. View a video about her.

Most graduating college students celebrate their final day of class with a huge sigh of relief, or perhaps a small party with friends and family.

Sharaine Johnson got a job.

On her last day at the Community College of Rhode Island, Johnson got the call from Lifespan offering her a position as a case manager, completing a remarkable journey for the Providence native who thrived despite a tumultuous upbringing and years of uncertainty following high school.

Nearly a decade removed from her first stint at a four-year university, Johnson graduates CCRI this spring with a certificate in Human Services, with a Social Services concentration.

She hopes to move up the ladder at Lifespan and eventually work with troubled adolescents so she can use her experiences in life to guide them down a better path.

“I’ve met some bad social workers as a child and even as an adult. I want to be one of the few that really care about these kids,” Johnson said.

“I had a bad childhood, so I can help somebody else overcome whatever obstacles are in their lives. That’s why I decided to go back to school.”

The 27-year-old single mother grew up with her three siblings in a household with addictive and abusive parents, raised mostly by her grandmother between the ages of 6 and 10 when her own mother and father disappeared for months on end.

“Both parents were in my life,” she said, “but it didn’t really matter. It didn’t feel like it.”

Because Johnson’s grandmother had 14 children of her own, many of whom struggled with addiction, two of Johnson’s cousins also lived with the family. Whenever her mother or father would come home following a long, unexplained absence, there would be as many as eight or nine people living in one room.

“My grandmother owned the house, but she couldn’t see her family struggling and out on the streets, so she was kind of like an enabler,” Johnson said.

On two separate occasions, Johnson and her siblings were taken into foster care: once when Johnson’s mother violated a no-contact order simply by returning to the house to help the children get ready for school and again years later after her father beat her youngest brother, who was a toddler at the time, leaving him hospitalized.

When Johnson turned 11, her grandmother died, and her mother soon realized she needed to spend more time at home with her children. She also took full custody of Johnson’s cousin, who had been living with the family for several years. Johnson, however, didn’t notice a change until her mother spent a month in jail for drug possession. As part of her punishment, her mother was forced to take parenting classes and submit clean urinalysis samples.

At 16, Johnson’s parents separated and she drifted farther apart from her father. She attended Central High School in Providence, but ultimately graduated from Tolman after the state forced the family to move to Pawtucket because there were too many children living in a house with too few rooms.

Johnson didn’t have many friends in high school because her classmates knew her background and knew her parents’ reputation. They were judgmental, so Johnson remained withdrawn, embarrassed to open up to or approach other students her age.

After graduating, she attended Newbury College in Boston, but was forced to drop out following her freshman year when her mother refused to sign for her federal student aid loan after the two got into an argument. She spent the next few years with no real direction, working at Walmart and dabbling in poetry and hip-hop until she met the eventual father of her child.

“It was the worst thing ever,” she said. “He bit my face. He bruised me. Cops were called. He had a felony on his record because he strangled me. It was bad.”

In October 2013, only five months into her pregnancy, Johnson’s doctors discovered the baby had no heartbeat during a routine checkup. They jump-started her labor and she gave birth to a stillborn baby later that day, worsening her depression.

Johnson and her boyfriend conceived again shortly thereafter and she gave birth to a healthy baby boy exactly one year to the date of losing her daughter. It changed her life. She broke off the relationship with her son’s father and decided it was time to turn her life around for the benefit of her own family.

She started working part time in the human services field at Family Service of Rhode Island counseling adolescents, but realized she could do better, so she enrolled at CCRI and returned to school in 2017.

Her college journey had its share of ups and downs. She worked weekends from 8 a.m. to 11 p.m. and took classes Monday through Friday, so she barely got to spend any time with her son. It nearly broke her. She considered quitting during her second semester, but her professors encouraged her to keep going.

“When my son couldn’t go to school because of the weather, some professors here would let me bring him to class,” Johnson said. “They told me, ‘Sharaine, you’re not dropping out.’ They had my back. They were helping me left and right any way they could.”

A lot has changed for Johnson in recent months. Her relationship with her mother has improved greatly and she has worked to reconnect with her father. She’s hopeful that within the next six months she can begin working in the adolescent program at Lifespan, where she feels she’ll make a greater impact.

The CCRI experience made Johnson believe in herself again and now she can help others do the same.

“I went to school before and was a full-time student before, but it wasn’t this. I didn’t feel this good or this confident until I came here,” Johnson said. “The professors here, they’ll email and say, ‘Sharaine, you missed class. You never miss class. Is everything OK?’ They really care about you and they’re definitely here to help you.

“CCRI helped me be more confident and comfortable because I know if I can do it here, I can really do it.”