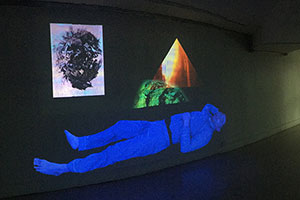 An image from "Pillow Talk at Knight" is displayed on the gallery wall.

The exhibition features performers Julia Egan and Francis Gilleese from the CCRI Performing Arts Department as two lovers who lie in bed talking, sleeping and waking up. Their sleeping minds send messages to each other in bursts of color, shapes, lost objects and patterns – all influenced by environmental and ancestral histories. It uses light as a visual representation of thought and communication through projection, reflection, refraction and perspectival shifts throughout the gallery.

Halpern works with film, performance, sound, text and paper, addressing the difficulties in understanding oneself and other people. Her work questions conventional human relationships to vision, hearing, reading and communicating and has been presented at The Kitchen, Experimental Intermedia, The Museum of Moving Image, Anthology Film Archives and Microscope Gallery, among others. She is a founding member of Optipus Film Group and has collaborated extensively with electronic musician Matt Wellins. Her work is represented by Microscope Gallery. She lives and works in Queens, New York.

Geraghty’s experimental films have been screened at the Rotterdam International Film Festival, Anthology Film Archives, B.A.M. Cinematek, the London Institute of Contemporary Art and Flaherty NYC. He is also a film, television and documentary editor with feature film work that premiered at the New York Film Festival and the Museum of Modern Art. He is an adjunct instructor of film/video at Rhode Island School of Design and holds a degree in film studies from Rhode Island College. Born and educated in Providence, he now lives and works in Queens, New York.