Grad, an ex-football player, dreams of career in community relations 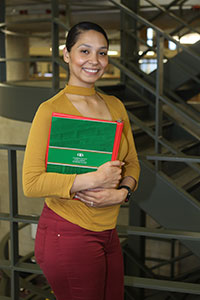 Desiree Martinez will transfer to Rhode Island College this fall to pursue a degree in communications.

In a span of just five months, Queens native and Providence resident Desiree Martinez conquered a trio of life-changing events.

The 32-year-old mother of two started a new job in February, walked the stage at the Community College of Rhode Island’s 53rd commencement in May as a first-generation graduate and then walked the aisle at the end of June, marrying her lifelong partner, Juan.

The dizzying, unrelenting beat goes on for the self-described “busybody,” who wouldn’t have it any other way.

“Life is too short to sit around and do nothing,” Martinez said. “You have one life. Do with it as much as you can.”

With her Associate in Arts – her second degree from CCRI – Martinez will transfer to Rhode Island College this fall to complete her bachelor’s degree in communications. Her lifelong dream is to work in community relations and perhaps open her own community center to promote a safer environment for area children while providing them with the opportunities she didn’t have growing up.

“I never had things like that, so because I was exposed to not having it, I want to do something to be able to help other people that grew up in a community where they don’t have much,” she said.

With even more on her plate as a wife, mother and full-time student, Martinez doesn’t appear to be slowing down anytime soon. She recently completed eight months of training for her current job at the newly opened blood bank CSL Plasma in Warwick, spending more than half a year living out of a hotel in Maryland.

Since 18, her life has resembled a daily planner with every page covered in ink. This frantic pace is all she knows.

Born in Queens, but raised in Providence since she was 2, Martinez grew up in a middle-class family with both parents and a younger sister, Tanya. Her father, born in Nicaragua, has worked in the upholstery business since he arrived in the United States 33 years ago, while her mother, who is of Puerto Rican descent, spent most of her life as a laundry aide before retiring.

Martinez attended Textron Chambers of Commerce Academy in Providence, the state’s oldest charter school, which eventually closed before reopening as the Academy for Career Exploration, but she dropped out at 18, jaded by the high school experience.

“I went through a lot. Typical teen issues,” she said. “I felt as though, as a teenager, sometimes you can’t express yourself to your parents if you’re going through things and I was like that. Because of that, I just wanted to leave. I felt I didn’t fit in. I had friends, but I didn’t feel like they were my friends.

“I was withdrawn, so I decided to leave.”

Martinez could’ve wandered down the wrong path like so many others before her, but instead earned her GED® credential that same year despite also becoming pregnant with her first child. She completed her certification before her former classmates graduated.

“It’s not like I wasn’t smart or intelligent. I just felt like I needed more and I could’ve done it faster,” she said. “I went back to school because it’s something I always wanted to accomplish. It was a goal I set for myself. My dad only went to second grade. My mother only went to high school. She always stayed in lower-key jobs.

Martinez took some time off from school following the birth of her first son, Javier, and lived the life of your typical stay-at-home mom, but “I’m a busybody so it was my driving me insane,” she said. After giving birth to her second son, Joel, three years later, she enrolled at CCRI to earn the first of her two certifications and worked four years as a certified nursing assistant before deciding it wasn’t the right fit.

On a whim, she applied for a job at the Rhode Island Blood Center, which led her to a decade-long career in phlebotomy.

“Why not?” Martinez said. “The thing about me is I like to try a lot of things. I’m the type of person who has no fear when it comes to trying something new.”

Two years into her new job, Martinez took advantage of an opportunity to work directly with Women & Infants Hospital in Providence collecting stem cells from the umbilical cords of newborn infants. After 10-and-a-half years at the blood bank, she moved on to CSL Plasma as a quality assurance specialist. She’s now in charge of making sure the facility is “audit-ready” and following all government regulations in the event of an impromptu inspection.

“I was exposed to a lot of pretty cool things that, for other people, you need a degree to see, and I had the opportunity to do that because of me always trying to pursue something,” Martinez said. “I’m always looking for something. If it’s not fulfilling, I want something else.”

Phlebotomy paid the bills, but Martinez still dreamt of a future in community relations, so she continued taking part-time courses at CCRI while working at the blood bank. Balancing motherhood with her full-time job, plus having to pay for school herself, kept her from gaining any real momentum in the classroom. She would attend for a year, then take a year off because of work or other obligations. The cycle continued for almost five years.

A lifelong sports enthusiast, Martinez also joined a full-contact women’s football league – “The best thing I ever did,” she said – spending a year with the Boston Renegades of the Women’s Football Alliance. The team traveled from Pittsburgh to Maryland for games and trained alongside former players-turned-coaches, among them ex-New England Patriots Patrick Pass and Vernon Crawford. She even dabbled in radio production, working for digital media outlet 990WBOB.com and WPRO for three years.

A year and a half ago, Martinez decided to buckle down, scale back on extracurricular activities and fully commit to earning her associate degree, even after landing her new position at CSL Plasma, which forced her to travel back and forth from Rhode Island to Maryland for eight months of training.

“I was coming back and forth for the kids a lot,” she said. “Sometimes I’d be there for a month and then come back for three days and then go back for another three weeks. It was tough, but it was definitely an experience I’d do again because I was around a different environment and I saw a lot of different things.”

During that time, she took an online course to keep up with her studies and flew back home on her weekend off just to complete the final exam.

“It was hard, but it got done,” she said. “No matter what, I was graduating. I wasn’t going to wait anymore.

“You can have 20 years of experience with something, but if you don’t have the foundation that school teaches you, you’re not going to get anywhere. I’ve learned that. I have 10 years of blood-banking experience and I have the qualifications to be a manager if I wanted to, but I don’t have that foundation that school gives you and that’s what’s prohibiting me. That’s what pushed me to continue and go farther.”

She expects to earn her bachelor’s degree within two years, possibly sooner if she takes summer courses, at which point she can finally pursue her dream job of working in the community service field helping others. The hectic pace she’s accustomed to figures to intensify once she enters the workforce, and Martinez’s journey is proof it’s never too late to get an education or chase your dreams.

“When I have a goal,” Martinez said, “I have tunnel vision.”