As CCRI launches its campaign for Sexual Assault Awareness Month across all four campuses, it remains focused on supporting a culture of safety, respect and inclusion with prevention education as key point of emphasis.

“We don’t talk about how you should walk across the parking lot with your keys ready, because that makes it sound like all you can do is try to keep from being assaulted,” said Nancy Forsstrom, program coordinator of CCRI’s Gender Equity Initiative. “What we’re trying to focus on is not every woman is a victim and not every man is somebody who’s going to assault you. And if everyone is working together, we can change the culture.”

According to the White House Council Sexual Assault Report, one in five women is sexually assaulted in college. More than 70 percent of rape victims know their attackers, while 90 percent of rapes on college campuses are non-stranger attacks.

To help bring these realities to the forefront, the Gender Equity Initiative is launching a poster campaign with a new poster each week in April highlighting important statistics and facts regarding assault and harassment. Themes range from consent to the probability of rapes occurring in public. 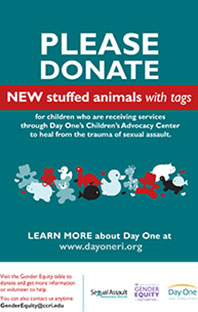 The initiative also will host bystander training sessions, offer HIV testing and set up information tables at each campus and collect donations for two organizations.

The Knight, Liston and Flanagan campuses will collect stuffed animals for children served by Day One, a sexual assault trauma center in Providence, while the Newport County Campus will collect toiletries for the Women’s Resource Center.

Volunteers from the Rhode Island Coalition Against Domestic Violence, Sojourner House (which specifically deals with domestic violence and sexual assault within the LGBTQ community) and AIDS Project Rhode Island will help staff the information tables alongside CCRI staff, faculty and students.

The goal is not only to teach all students how to protect themselves or others from an assault, but also to offer education to prevent future incidents.

“You’ve seen posters that give risk-reduction tips and say, ‘Don’t be a victim,’ which makes it seem like it’s your fault. They’re trying to be practical and educate, but what we need to tell people is, ‘Don’t assault somebody.’ It’s about people understanding how to respect somebody else and how to communicate positively. We need to give people the tools and help them understand.”

To do so, Canning said, CCRI engages in dialogue and offers education throughout the year, not just April. The college currently has online prevention trainings available to students, faculty and staff, and the next initiative is to create an interactive training video geared toward CCRI students as a primary prevention tool. In addition, Canning will be running presentations for faculty and staff.

“Most of the sexual assaults and dating violence incidents occur within the first 60 days of school. It’s called the ‘Red Zone,’” Canning said. “There’s a little more independence. People are starting to have a more independent social life, perhaps, and you’re in a new environment, so on a college campus, the programs should be starting before people even get to college.”

While the effort to raise awareness and educate the public is an ongoing battle, the recent rise of the #MeToo movement has helped bring the conversation to the forefront. What started in October with allegations of sexual misconduct against media mogul Harvey Weinstein quickly went viral when actress Alyssa Milano tweeted the now famous hashtag in an effort to encourage victims of assault or harassment to speak up and share their stories.

In December, Time magazine named “The Silence Breakers” as its 2017 Person of the Year in honor of those who came forward to report sexual misconduct while fueling a worldwide discussion on harassment and assault.

The movement hasn’t changed CCRI’s initiative in terms of raising awareness and engaging in prevention efforts – “We should be doing it anyway,” Canning said – but it has forced more people, both men and women, to become part of the conversation while encouraging victims to report incidents of misconduct.

“It’s a very helpful dialogue because it does show this is real,” Canning said. “It’s amazing how much people talk about it, which is really, really important.” Canning believes that the national and international dialog highlights the fact that this is an issue that involves and affects all of us, regardless of gender, race, national origin, sexual orientation or disability.

Additionally, it reopens the conversation regarding the culture of acceptance and complacency that has existed for decades – the idea that “boys will be boys,” Forsstrom said – which has often suppressed victims from coming forward.

“I think people are much more aware that this problem is everywhere,” Forsstrom said. “Some people are likely to say, ‘Oh, come on, that doesn’t mean anything,’ or, ‘That’s not a problem.’

In addition to encouraging victims to speak up, Forsstrom hopes her workshops will help combat the bystander effect, a psychological phenomenon in which individuals are less likely to offer help to a victim when other people are present.

“It’s a natural thing,” Forsstrom said. “They don’t want to get involved; they’re not really sure what’s going on, they think it’s not their issue, they second-guess what the dynamics might be – ‘Well, maybe it’s really not what it looks like’ – and they don’t think it’s their business. The pressure of everybody else’s inaction leads to more inaction. If you see enough people standing around, you say, ‘OK, I guess we can all stand around.’”

Once a participant completes bystander training, he or she receives a pin as a new member of the “Join Me” campaign, which CCRI launched in 2017.

“We had a lot of people on campus that have been asking for this kind of programming for a long time,” Forsstrom said. “Now we have to reach people to let them know this is something that’s important for them to think about.”

Forsstrom said the vast majority of sexual assaults are between the ages of 16 and 24, and the next biggest group is between 24 and 30, so CCRI’s efforts to raise awareness are as important as ever.

Victims can be hesitant to come forward, but Forsstrom is hopeful the momentum from viral campaigns such as the #MeToo movement and the efforts of CCRI will bring about significant change.

“It’s about making people more aware,” Forsstrom said. ”It’s not something you can fix overnight, but at least people are talking about it. I think that’s the biggest thing.”

Anyone affected by sexual violence should know that he or she is not alone and that resources for reporting, medical care, accommodations and support are available. Please see the Title IX Resource Rights and Options Handbook.