Three Community College of Rhode Island students presented research to more than 500 honors students and faculty at the Northeast Regional Honors Council, which the college hosted at the Omni Hotel in Providence from April 12 to 15.

With the theme of “A Lively Experiment: Seeing Anew,” students from throughout the region explored the city and presented their honors work. 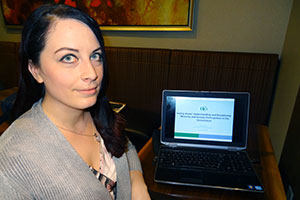 Andrea Grenga presented “Seeing Anew: Understanding and Broadening Minority and Female Participation in the Geosciences,” exploring possible reasons for lower rates of women and minorities in the geosciences. She found that women in introductory geology classes she studied consistently had less interest in the geosciences than men, both in academia and as career paths. In contrast, minorities have similar rates of interest as non-minorities, but do not follow through to get a degree in the subject, nor to pursue it as a career. She believes the next step in this research is to determine why this early interest is lost among minorities and to discover the reason for the relative lack of interest among women. 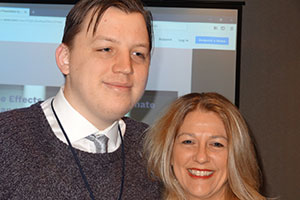 Stephen Shea spoke about his research, “Stereotypes of Community College Students.” Among those he studied in Rhode Island, he found there is a lower opinion about the competence of CCRI students as compared with University of Rhode Island students. This negative stereotype leads to his concern about the job market ramifications of such a bias. He is pictured with psychology Assistant Professor Renee Saris-Baglama. 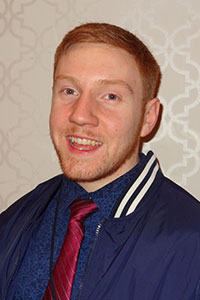 Sean Rush had a poster display, “Seeing New Ways of Developing Muscle Growth: An In-Depth Look into Hypertrophy.” He looked at three variables on muscle development: consumption of protein, alcohol and supplements. He found there are specific amounts of each that an athlete should be aware of, and that the timing of consumption relative to physical activity is important. One key finding is that if a person exercises after fasting, such as first thing in the morning, it is important to eat protein relatively quickly after working out for the best muscle development.

The conference facilitated audio-visual presentations, roundtable discussions and poster displays. In addition, attendees explored Providence to learn about the history and culture of the city by critically investigating the buildings, people and environment.

Lynne Andreozzi Fontaine and Karen Kortz, Honors Program co-directors, are pleased with the success of the conference. Attendees had such a positive experience that they were asking when CCRI can host NRHC in Providence again. Learn more about the CCRI Honors Program.