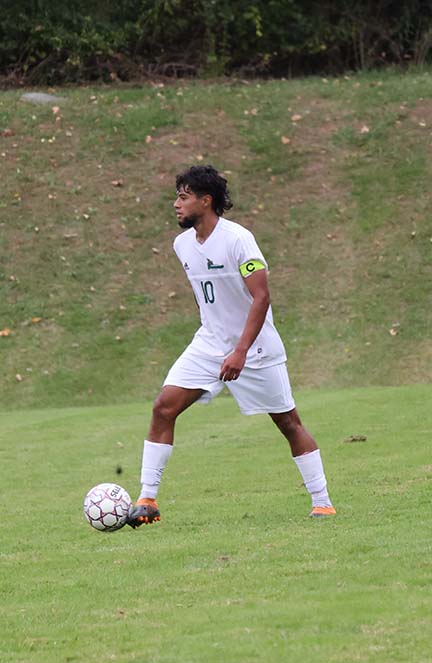 Warwick, R.I. – October 12, 2021:  The CCRI Knights Men' s Soccer team welcomed the Bayhawks of Bristol Community College from Fall River, MA to the CCRI Soccer Complex located on the Flanagan Campus on Saturday for a 1pm start.  The Knights defeated the Bayhawks 5-1. With the victory CCRI improves to 6-3 on the season.

This was CCRI's second game against the Bayhawks this season. The Knights took the victory the first game at Bristol CC in Fall River, MA 2-1.  Saturday the Knights were playing their second game after losing a scrimmage to America International JV Squad Friday.

The Knights were nursing some injuries so Head Coach Gabe Toro had to move some players to different positions for today's start.  Coach Toro commented: “Our players, in general, are very versatile and most players are able to take any change in stride.”  This paid off as the Knights were encouraged to come out and attack. Co-captain Pablo Puac (Pawtucket, RI) provided persistent pressure up high on the ball and it paid off as he scored the first goal after a mistake by the Bayhawk defense.  Puac’s goal made the score 1-0 CCRI at the four minute mark. At about the 11th minute the Bayhawks caught a break when a Knight touched the ball with his hand accidently and the official called a hand ball in the 18-yard box.  Knights’ co-captain Ednilson Tavares (Pawtucket, RI) tried to make another Penalty Kick save this season, but he guessed incorrectly and the Bayhawks’ Kevin Lopes was able to tie the match 1-1.  Just one minute later Knights’ midfielder Matt Gibeau (Warwick, RI) answered that goal with a tally of his own to put CCRI back in front 2-1. Gibeau was one of the players changed from defense to offense today by Coach Toro, a move that proved beneficial.  Gibeau dribbled up the right side of the Bristol defense and was able to beat a few Bayhawks as he entered the box at a difficult angle.  From there he unleashed a top shelf ‘laser beam” blast into the far top corner.  Coach Toro commented: “It was definitely the best goal of the season for the Knights so far.  Matt has the ability to play anywhere on the field and today he was able to show his versatility.” Before the half ended, Knights’ co-captain Pablo Puac's relentless pressure and work off the ball paid some dividends again as he was able to anticipate a loose ball in the box at the 37th minute of the half, Puac controlled the ball and then found the corner on a shot past the Bayhawk keeper.  The first half ended with the Knights leading 3-1.

In the second half, Joustin Rivera (Providence, RI) received a yellow card for a hard tackle and had to come out of the game.  Coach Toro replaced him with Cristian Gaviria (Cranston, RI), who just returned to the pitch from a minor injury and is a very good technical midfielder.  About 24 minutes into the second half, Matt Gibeau, once again, was able to get loose on the wing and he served up a good cross to Gaviria who went up for a head ball as the Bayhawk goalie came off his line to attempt to punch the ball.  Gaviria showed some bravery as the keeper’s fists came at him.  The ball was chipped perfectly from Cristian's head and it rolled into the back of the net.  In the last 30 minutes, the Knights continued to push up field and began to get into a really good rhythm.

Coach Toro told them at half time that they need to trust each other and use each other to move the ball quickly up the field and not to be selfish.  The Knights answered the request as Joe Dorce (Providence, RI) and Ricardo Foster (Cranston, RI) were getting reps and good looks at goal.  Thiago Pereira (North Providence, RI) and Max Rodriguez (Pawtucket, RI) also entered the game and make an impression.  All the Knights contributed today and it was a good overall performance.  In the 75th minute, Cristian Gaviria was able to create some space for himself, and he took the time to find Max Rodriguez in the goal area.  Rodriguez was able to stay poised and he slotted the ball far post on the ground, the kind of shot coaches like to see.  This put the Knights up 5-1 and this was how the game would end.

Coach Toro commented after the game “Everyone on the team contributed to the win today, and as the season marches on this is something that will be depended on more and more.  Coach Toro tells all the players to be ready when their name is called.”

CCRI Knights welcome Northern Essex Community College on Tuesday the 12th for a 3:30pm kick-off at the CCRI Soccer Complex in Lincoln, RI.