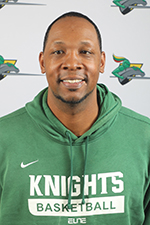 Marcus Douthit replaces Rick Harris as the Interim Head Coach for the 2022–23 season.

He was selected by the Los Angeles Lakers in the second round (54th overall pick) in the 2004 NBA Draft. He ended up playing in Belgium in his first year as a professional. In his second year as a pro, he played in the NBA D-League for the Albuquerque Thunderbirds under head coach Michael Cooper in the 2005-06 season, leading them to a league championship. He also played in several European countries, including Turkey and Russia.

In addition to playing in Europe, Douthit also played in Asia, where he had a stint in South Korea in 2006-07 for the Daegu Orions. In 2010, he returned to his native Philippines and played for the men’s national team, Smart Gilas, where he earned the MVP award in the 2010 Champions Cup. A year later, he joined the Foshan Dralions in China before returning to the Philippines in 2015 to play for Blackwater Elite, winning the 2015 PBA Commissioners Cup. His last stop in Asia was in 2017, when he played for the Hanoi Buffaloes, a Vietnamese team that competes in the Thailand Basketball Super League.

At the college level, Douthit played under head coach Tim Welsh at Providence College and earned the team’s Marvin Barnes Defensive Player Award in his junior and senior seasons. Douthit will use his experience as a collegiate and professional player and give insight to mold this year’s young CCRI basketball squad. He earned his bachelor’s degree in Social Science. 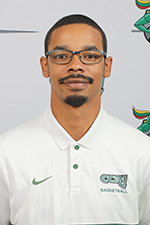 Josh Perry returns to the CCRI men's basketball coaching staff for his fourth year after serving as a volunteer assistant during the 2014-15 season.

Perry played two seasons at CCRI from 2010 through 2012 as a backup guard, appearing in 42 games. Last year, Perry helped with statistical entry and aided with game reports for the team. His experience with community college athletics, in addition to his expertise as a player, make him a valued asset to the CCRI coaching staff. 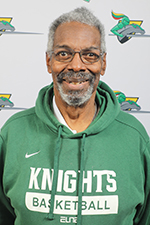 One of the more well-respected coaches at CCRI, Andy Jackson brings a wealth of knowledge both on and off the court, having trained some of Rhode Island's top high school and college athletes through the years. Among his most notable clients are former All-American running back Steve Silva of Holy Cross, former Boston College and Indianapolis Colts defensive back Jamie Silva, return specialist and former fourth-round NFL draft pick Will Blackmon of Boston College, former Stonehill College basketball team captain Soap Toun and former Bishop Hendrick and West Virginia basketball standout Joe Mazzulla.

In addition to his duties with the men's basketball team, Jackson trains CCRI athletes in various sports and is known for always going above and beyond the call of duty. As a result, he was named CCRI's Coach of the Year for the 2014-15 season.

Jackson competed actively in bodybuilding and held the titles of Mr. Eastern America, Mr. Boston and Mr. Rhode Island from 1970-72. In 1990, he finished fourth in the Mr. Rhode Island competition. Jackson graduated from Mt. Pleasant High School in 1970 and received a Technical Arts degree from Providence Opportunity Industrial Center in 1974.
Jackson has served as a mentor to area youth for more than 25 years with experience at the Olneyville Boys Club, Washington Park Community Center and John Hope Settlement House. He also coaches in the Providence Recreation Fall League.