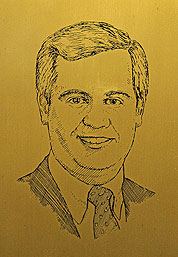 A member of the college’s class of 1974, Roger N. Begin served as the president of the Community College of Rhode Island Foundation. He first got involved with the Foundation in 1982.

In 2007, Begin was appointed vice president and senior sales director for Mellon Financial Corporation’s Private Wealth Management group in Providence. During his career, he was vice president of the Institutional Assistant Management Division of Fleet Investment Services. He also served as a general officer of the state of Rhode Island for eight years, as lieutenant governor from 1989 to 1993 and as general treasurer. He was a state representative from 1973 to 1984.

Begin has been involved in many avenues of community service and serves on the Board of Trustees of Women & Infants’ Development Foundation. He was secretary of the Board of Trustees at Bryant University and Meeting Street School and co-chaired the fundraising campaign for the Woonsocket Museum of Work and Culture. He is a former board member of the United Way and Culture and of the United Way of Southeastern New England. He is a graduate of Leadership Rhode Island.

After graduating from CCRI, Begin went on to Bryant College to earn a bachelor’s degree in Business Administration.