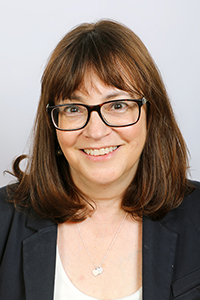 Sandra Luzzi Sneesby is a media artist whose work includes video and interactive. She has written, produced, directed and edited short and feature length films and videos. Her interactive work includes web development, multimedia kiosks, and enhanced music CDs. From binary to fps, her passions include both film and technology.

Sandra has created multimedia software, including a touch screen Kiosk retail system, an enhanced CD Turn it On! Turn it Up! for the Grammy Award winning Roomful of Blues band and many website projects. Her passion for video and film is evident in her work as producer and editor on several independent feature and short films, including her own short narrative fiction film, Nativity. Her editing work led her to earn an ACI Academic certification from Avid Technology, which enables her to train a new generation of Media Composer editors.

She has taught video production, technology and multimedia production at Providence College, Rhode Island School of Design and the Community College of Rhode Island, where she is currently an Associate Professor of Communication. She also serves as Distance Learning Coordinator, develops curriculum and teaches courses in Video Production, Mass Communication, Video Editing, Web development and several others. She is a co-advisor to the New Media Group student club and serves on several college committees, including the Americans with Disability Committee and the Accessibility Task Force. Her work with web development students earned her an Award from the Federal Emergency Management Agency (FEMA), for facilitating construction of a website for FEMA’s Student Tools for Emergency Planning (STEP) program. She also led students on construction of a large scale website for the Girl Scouts of Rhode Island, including video commercials for broadcast and web.