CCRI alumnus Gregg Cornell, the school's longest-tenured coach, enters his 31st season as the cross country and outdoor track and field coach and his 18th as the indoor track coach since the latter began in 2002. His drive, knowledge and teaching skills have combined to produce several standout athletes at the college.

During his career, Cornell has coached 12 NJCAA Division III All-Americans and more than 25 All-District runners. The men's team has placed in the top three at the Northeast District Meet five times and in the top 10 at the NJCAA Division III National Championship three times.
Cornell has been a runner for more than 30 years. As a student at CCRI, he was the college's first All-New England cross country runner in 1982 and was named to the All-New England team for two consecutive seasons. Cornell was a member of CCRI's first two New England title teams and was voted CCRI Athlete of the Year in the 1983-84 season. He is still recognized as one of the best runners in the college's history.

Cornell continued his running career at Bridgewater State University, where he earned Division III All-American honors in 1986 and was named Bridgewater State's Athlete of the Year in the 1986-87 season. His success carried over to marathons, and he became one of the state's best long-distance runners by winning the Cape Cod Marathon in 1995 and the Ocean State Marathon in 1991.

The college presented Cornell with the Distinguished Alumnus Award during the Rhode Island Legislative Scholar-Athlete Awards ceremony at the State House in April of 2010. He previously received special recognition in 1989 when he was inducted into the CCRI Athletic Hall of Fame. 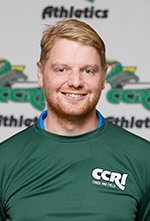 Hunter Stewart, who competed for CCRI's cross country and indoor and outdoor track and field teams, will serve as assistant coach of the cross country squad for his ninth year.

An excellent student, Stewart was a recipient of the Rhode Island Legislative Scholar-Athlete Award while at CCRI. He transferred to Rhode Island College to compete in all three running sports, earning All-Alliance/Little East honors as a junior and senior. As a senior, he was named captain and junior assistant coach of the cross country and indoor track teams. He graduated from RIC with a bachelor's degree in English in 2010. Stewart runs for the Providence Cobras racing and track and field teams.