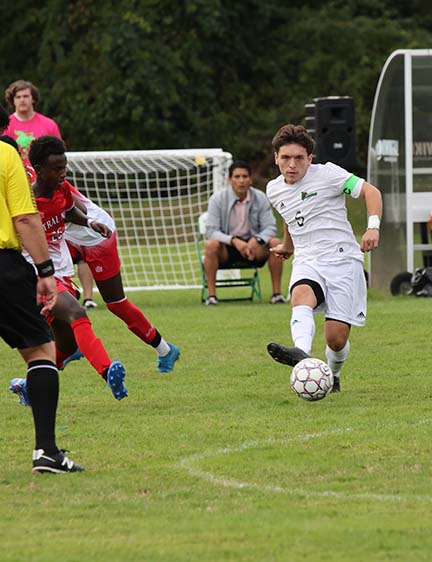 Warwick, R.I. – October 29, 2021: The No. 3 seeded CCRI Knights Men’s Soccer team hosted the No. six seeded Blue Knights of Northern Essex Community College (NECC) Thursday at the CCRI Soccer Complex in Lincoln for a Region XXI Division III Men’s Soccer Quarterfinal Game.  CCRI defeated NECC 3-0 to improve to 9-4. With the victory the Knights advance to the Region XXI Semifinal versus the Tigers of Roxbury Community College on Saturday.  The win was also very significant to the Knights program as it was the first playoff victory for Head Coach Gabe Toro and also extends his mark for most wins in a season with nine.

Coach Toro told his players before the game “You need to come out offensively hungry and to utilize the muddy conditions to your advantage by attacking the Northern Essex backline with shots and through balls.”  23 minutes into the half Knights co-captain Wilson Penafiel (Providence, RI) played a perfect ball over the defense to find fellow co-captain Pablo Puac (Pawtucket, RI) making a slant run across the box. Puac settled the ball down and turned to place the ball clinically into the back far corner of the net to give the Knights a 1-0 lead.  The first half ended with CCRI leading 1-0.

During the halftime break Coach Toro was not happy with the shot count and encouraged the Knights to kick it up a notch to increase their shot count in the second half.  That was all the Knights needed to hear as they came out firing on all cylinders with Aaron Ramos (Warwick, RI), Wilson Penafiel and Pablo Puac intensified the Knights’ firing onslaught.  Providing the shot opportunities were for the shots were Joustin Rivera (Providence, RI) and Ricardo Foster (Cranston, RI) who kept pushing the ball up the field to get good looks at the goal.  Within 20 minutes of the second half CCRI had more than 10 shots on net. They ended the game with 19 shots on target.  In the 21st minute, Aaron Ramos unleashed a laser from about 30 yards out that had severe top spin to go over the Northern Essex Keeper’s head dip down and rattle the back of the net. It was a brilliant strike from Ramos that left the Goalie with no chance to make a save.  This gave the Knights a 2-0 lead. Coach Toro commented “All the shooting paid off.”  Coach Toro reaffirmed to the team “Only good things happen when you shoot.” CCRI took this in stride and kept knocking on the Northern Essex door.  Less than 10 minutes later, the Knights started combining, passing the ball well and exposing the Northern Essex defense.  Thiago Pereira (North Providence, RI) put Wilson Penafiel into the area where Penafiel was able to use deft footwork to avoid a myriad of defenders including the Keeper who saved a couple attempts before Penafiel could finish the play with a beautiful strike of his own to give the Knights a comfortable 3-0 lead.

With under a minute in the game, a loose ball in the CCRI box was surrounded by CCRI players, Sam McCutcheon (Smithfield, RI) came in with a high rate of speed to support. The muddy pitch made it hard for him to stop on a dime and he ended up fouling a Northern Essex player which resulted in a PK shot for Northern Essex.  Knights co-captain Keeper Ednilson Tavares (Pawtucket, RI) had one more job to do before the end of the game.  Northern Essex Midfielder Ethan Rousseau stepped up to the PK spot and took what was to be the final shot of the game.  He tried for the right side of the net, but Tavares had different plans as he dove over to make the big save to keep his clean sheet.

CCRI's defense was able to clear the area and finish the game with possession.  CCRI had a very good complete game, defenders, Matt Gibeau (Warwick, RI), Fabian Mueller (North Kingstown, RI), and Christian Justiniano (Providence, RI) held up the backline well.  Adnel Lopez (Cranston, RI) filled-in on the flank but came out with a knock, however before he was removed, he did a great job of protecting the right side.  Diego Alvarez (West Warwick, RI) replaced Lopez and was able to keep up the hard work as he helped the defense stay solid in the back.  Coach Toro commented after the match “We will need everyone again as they move on to the semi-final game this Saturday against Roxbury.”

The Knight advance to the Region XXI Semifinal game versus No. 2 seeded Tigers of Roxbury Community College in Roxbury, MA Saturday the 30th at 6:00pm at Madison Park High School Boston, Massachusetts.