Knights Shutout Cougars 5-0 and Improve to 8-3! 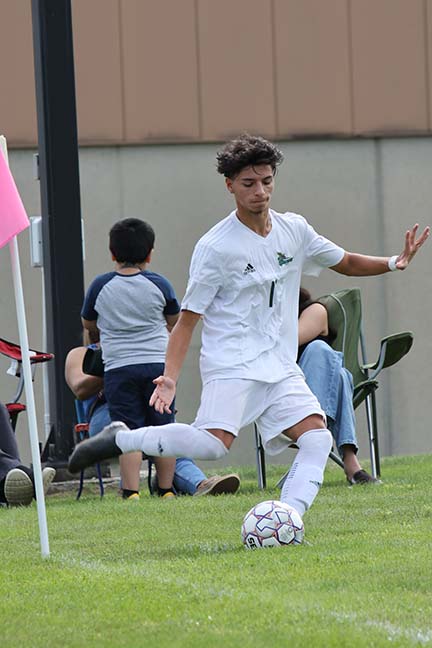 Warwick, R.I. – October 22, 2021: The CCRI Knights Men’s Soccer team hosted the Cougars of Holyoke Community to the CCRI Soccer Complex in Lincoln on Thursday for a 3:30pm Region XXI showdown. The Knights defeated the Cougars 5-0. With the victory CCRFI Improves to 8-3 on the season. The eight wins for the Knights are the most for CCRI Men’s Soccer since Head Coach Gabe Toro to the helm for the Knights.

The Knights just came off their first Region XXI DII league loss to Roxbury Community College Tuesday evening. After that physical match, the Knights needed to provide rest to some of their players. Coach Toro mentioned: “The duration of the season can be long, and the entire team needs to contribute throughout the season for it culminate successfully. Today was one of those days that the substitutes had to pull their weight and contribute to the big picture as some starters got some rest and took some time to recover.” With his knowledge in hand, Coach Toro utilized a line-up with totally new look and Toro was looking for them to perform at the same high level and to be able to attack Holyoke with some clinical soccer.

In the 25th minute, Ricardo Foster's high pressure created an opportunity for him where he was able to disrupt the clearing attempt of a Holyoke defender, the ball hit off Foster's foot and it took an awkward deflection which resulted in a high arcing shot over the Cougar goalkeeper making the score 1-0. In the 39th minute, co-captain Wilson Penafiel (Providence, RI) was put into the game to create more offensive opportunities, Penafiel was able to combine with Joustin Rivera putting a through ball into the area where Joustin Rivera was able to do the rest as he slotted the ball past the Cougar goalkeeper for the second goal before the end of the half. The Knights went into the halftime break leading 2-0.

In the second half the Knights midfield and defense started to settle in and become more comfortable. Nick Guertin (Cranston, RI), Adnel Lopez (Cranston, RI) and Diego Alvarez (West Warwick, RI) all played well out of the back feeding balls into Gaviria and Sam McCutcheon in the midfield. Second half started off with Joe Dorce (Providence, RI) of the Knights pressuring high up field as a ball was stuck into his charging path, there was a ricochet off his leg that reversed course with force into the back of the Holyoke net which gave the Knights a 3-0 lead. Sam McCutcheon who has played with heart all year and always brings 110% effort when he plays, earned some points today with a pair of goals in this match up. A few minutes after Joe Dorce's goal, McCutcheon received a nice through pass from Wilson Penafiel, but Sam had to do more work, as he navigated through some defenders, but the shot was what made the goal special, a nice low perfectly placed shot into the side net. Coach Toro mentioned “It is exactly the shot you want to see them work on over and over again while training. Seeing it in the game makes you feel good about them working on it during practice.” In the last minute of the game Max Rodriguez-Cepparo dribbled a few players down near the end line, he looked up and put in a perfect cross which found Sam McCutcheon making the right run at the right time to tap the ball into the net. This was the last goal of the game which made the final score 5-0. Knights Goalkeeper Alex Johnson (West Warwick, RI) also came up with a huge diving save in the final five minutes of play to keep the clean sheet for the Knights.

CCRI's next game is Saturday the 23rd for a 1:00pm kick-off versus Bunker Hill Community College at the CCRI Soccer Complex on Lincoln, Rhode Island Flanagan campus. It will be sophomore day and the last game of the regular season as the Knights look forward to post season play.