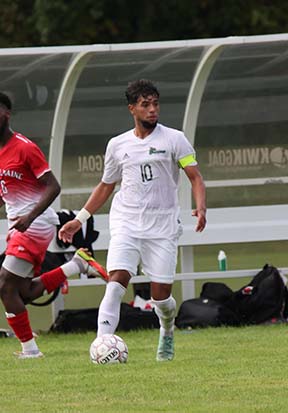 Warwick, R.I. – October 25, 2021: The CCRI Knights Men’s Soccer Team hosted the Bulldogs of Bunker Hill Community College on Saturday at 1:00pm for a Region XXI showdown at the CCRI Soccer Complex in Lincoln, RI. The Knights lost to the Bulldogs 5-0. With the loss CCRI falls to 8-4 overall on the season and 6-3 in Region XXI play.

This game was supposed to be a very competitive match-up between Bunker Hill and the Knights who are two of the teams at the top of the table in Region XXI. A win Saturday given the Knights a bye in the first round of the Region XXI playoffs. However, from the opening whistle it was clear a win was not in the cards. Knights Head Coach Gabe Toro mentioned: “The Knights did not come out today in the right mindset to compete for the bye next week in the playoffs.”

The Bulldogs caught the Knights on their heels and were relentless for 90 minutes. Just two minutes into the game, a shot from a Bunker Hill player hit off a Knight to make it a 1-0 BHCC on an own goal. 18 minutes later, Bulldogs’ Forward Nicolas Corteggiano scored a goal after receiving a through ball. Before the half, the Knights lost the ball in the defensive third and Bulldogs’ Forward Matheus Calegari was presented with an open goal to shoot upon which he converted making the score 3-0 BHCC at the half.

The Knights held off the pressure from the Bulldogs for the first half hour of the second half but with 10 minutes left in the game Matheus Calegari tallied his second goal of the game to give Bunker hill a 4-0 lead. Just one minute later Gustavo Andrade pushed across The Bulldogs’ final goal making the final score 5-0.

Coach Toro stated plainly “Our players were not ready to play today, they came out flat and disoriented and could not get organized. Hopefully, we can regroup and play the way we know we can in the playoffs next week.”

The next game for the No. 3 seed CCRI Knights will be when they are scheduled to host the No. 6 seed Knights of Northern Essex Community College on Tuesday the 26th for a 3:00 pm kick-off weather permitting. the game will be played at the CCRI Soccer Complex located on the Flanagan Campus in Lincoln, RI.