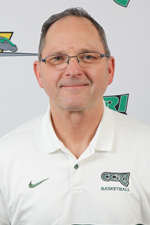 Our series continues of introducing our readers to our coaching staff and their particular philosophies. Our next introduction is Head Men's Basketball coach, Rick Harris.
How would you describe your coaching style?
I love practice and team building. Practice is similar to the classroom for our team. I am a coach who likes to play a lot of players come game time. Playing time though is earned in practice. I believe I am a coach who works hard to put his student/ athletes in the best possible position to be successful. Basketball is a game in which great things can happen on the court when everyone is working together. I try to get the players to recognize their strengths and bring them to the team. Hide your weaknesses as a player, but work hard on improving them and becoming a complete player. We try to take everyone's strengths and mesh them all together to become the best team we are capable of.
What is your most memorable moment as a coach?
I have been very fortunate in that there have been a few. Probably one of the highest on the list was watching our 2012 CCRI team come back from a 17 point second half deficit to defeat South Suburban C.C.in the 2012 D2 National Tournament semi finals. We won the game in overtime led by Desmond Williams 37 points and Steve Bevilaqua's two big long distance three point shots. Watching the young men celebrate together with big smiles on their faces in the locker room after the game was what gave me the most pleasure. It was extremely satisfying to see the young men happy and rewarded for all their hard work. We lost in the National Championship to Mott C.C., but it was a truly memorable team and season for sure.
How would you describe your team culture?
CCRI's basketball culture consists of student/athletes who work to achieve goals they choose together. Trying to always be as positive as possible, putting aside individual goals for team goals, working as hard as you can to improve your teammates which leads to your self improvement. These are some of the beliefs and attitudes that give CCRI's team the chance to become the best team that it possibly can be.
Who is your coaching role model and why?
John Wooden Coach Wooden never spoke of winning games. He only spoke of preparing and doing your best. He rarely scouted the opponent. He felt if you took care of the things that you could control in front of you then everything else would take care of itself and work out as it should.
What is your favorite quote?
I have two: "The harder you work, the luckier you get" Author unknown " It's the little details that are vital. Little things make the big things happen." John Wooden
What lessons did you learn from your playing days?
As a player I saw how team play (five players on the court working as one) and hard work could help teams be very successful. The most talented teams don't always win. Teams that play cohesive team basketball though, have a chance to do great things.
What are the characteristics you look for in student-athletes?
Love the game and want to be in the gym getting better. Coachable, they want to be told by their coach what they need to do better along with what they do well. They take the bad with the good. Unselfish, will do what the team needs them to do. Put the team first. Positive Communicators, speak positively to teammates, coaches, opponents, family and friends. Serious students., give just as good an effort in the classroom as on the court.
What word best describes your current team?
2019-2020 Team: Expectations.  Team members all came to understand what was expected of them.
Who is one athlete you remember watching as a kid who really impressed you on and off the field?
Jerry West His Laker teams lost eight times in the NBA Finals before they finally won in 1972. Jerry West never gave up and always carried himself with grace and class. I guess that is why to this day the NBA uses his image as its logo.
What factors played in your decision to become a coach at CCRI?
After 16 years as a high school coach at Cranston H.S. East I moved on to CCRI. CCRI was always special to me because I graduated from the school in 1980 and because of its rich academic and athletic tradition. I could never fill Coach Vin Cullen's shoes but it was special to me to have the opportunity to coach at the same school as someone who I considered one of the best ever to coach in RI and New England. Coach Cullen along with Charlie Wilkes were special people and great coaches at CCRI. True Hall of Famers! Many tremendous athletes played at CCRI as well and used the school to help them go on to be successful members of their communities. CCRI's coaches in all sports as well as its staff and administrators within the Athletic Department have helped make the school the top community college in New England as well as one of the best in the country. CCRI has always been a great starting place for students before they moved on to four year schools. Affordable, great academics and athletics have made CCRI the ideal place for young woman and men to begin their college careers. I always felt extremely fortunate to have the opportunity to serve as its head men's basketball coach.