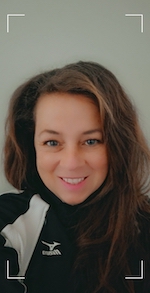 Our series continues of introducing our readers to our coaching staff and their particular philosophies. Our next introduction is Head Coach of Men's Club Volleyball and Women's Beach Club Volleyball, Anne-Marie Balboni.

How would you describe your coaching style?

Straight forward mixed with sarcasm and a balance of one-on-ones with team instructions.

What is your most memorable moment as a coach?

Nationals every single year is memorable. Competing a the National level as the only community college in the USA brings a spot light to CCRI and that is memorable.

How would you describe your team culture?

Team culture is a balance between setting goals for each player and setting goals for the team. This involves a lot of one on ones during practice offset by by team instructions. This leads to "coach mimicking". A team that can coach mimic can win tough matches.

Who is your coaching role model and why?

I don't have one. A team is a group of strangers that all need to buy into achieving the same goal when the opportunities presents itself. I do learn from other motivational people and apply that to coaching. And I do re-quote Coach Belichick's "Games are won during practice, not at game time"

What is your favorite quote?

I don't have one but I'm sure if you ask former players they could give you some. CCRI held a coaching seminar about 12 years ago and the speaker was awesome. He said that when an athletes heart is pumping, the blood stops flowing to certain areas of their brain. The speakers advise was to use at the most three words to instruct athletes so that their brain can understand. I adopted that and now use three word phrases throughout my practices.

What lessons did you learn from your playing days?

There is role for every player on a team, and that role isn't more important than any other role. All roles are equal.

What are the characteristics you look for in student-athletes?

Respectful and coachable. I once looked at a 6'4" male high school player who was an outstanding athlete. During a time out he threw a water bottle on the ground and left the spill. The coach told him to clean it up and he refused. I walked out of the gym and when the player contacted me asking about my team and said "I was not interested in him".

Motivated. They all want to picked up by four year schools, they all want their skill level to be higher at the end of the season, they are all there to learn.

Who is one athlete you remember watching as a kid who really impressed you on and off the field?

There are too many.

What factors played in your decision to become a coach at CCRI?

I believe CCRI is a bridge for those students who "just don't know yet". What a great setting for a coach. To be in a young person's life when they "just don't know yet", to watch them discover and to be a small part of showing them all their options is truly a blessing. I don't want to be anywhere else but CCRI.