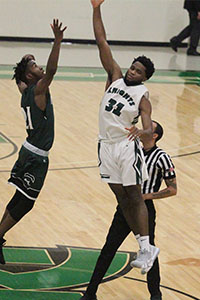 Warwick, R.I. – December 10, 2018: The CCRI Knights men's basketball team hosted the Buccaneers from Massachusetts Bay Community College (MassBay) for a Saturday afternoon showdown. CCRI dominated early however MassBay battled back to draw within single digits before the Knights eventually ran away with it winning 91-68. The win improves CCRI's season record to 9-2 overall with an 8-1 Region XXI record.

The Knights started well, jumping out to a 6-0 lead in a mere 61 seconds of play. CCRI kept building on that lead to 15 points with 5:37 left in the first half and the scoreboard reading 40-25. Freshman Jason Palmer (Narragansett, RI) led the charge through the first half scoring 14 points with four rebounds and three assists. Sophomore co-captain Peter Wilson (Providence, RI) dropped 10 points and adding two rebounds, two assists and two steals. Freshman Darren Robinson (Providence, RI) chipped in eight points and one block. The lead continued to grow and settled at 19 points, 55-36 at halftime.

The Buccaneers battled back, going on a 10-0 run to draw within single digits, 55-46. With less than 10 minutes left on the clock the Knights led 69-59 and they never looked back going onto win handedly 91-68.

The Knights were led by Jason Palmer who racked up his sixth double-double in a row, totaling 20 points, 11 rebounds and three assists. Sophomore Oscar Iteji (Schenectady, NY) also registered a double-double as he snatched 12 rebounds and scored 10 points in addition to his three blocks, two assists and two steals. Iteji's three blocks puts him to 29 on the season which is good for No. 8 in the nation. Also performing well was Peter Wilson as he scored 19 points with six assists and two steals. Darren Robinson shot well, going 7-8 from the floor, 2-3 from three-point range. Robinson tallied 16 points with four rebounds and three blocks.

Head Coach Rick Harris commented: "Today capped off a very good week for the young guys. Chemistry continues to develop and the players see the value of game execution. Springfield Tech on Tuesday will be a game we need to play very well in and we need to be sure we are not looking too far ahead to Thursday when we take on ranked Bristol County CC. Guys all continue to make solid individual strides with Jason Palmer just continuing each and every game to raise his level of play to heights I didn't think he would get to this early in his comeback year. He has been amazing with six straight double doubles!"

The CCRI Knights men's basketball team will next be in action on Tuesday, December 11th at 7 p.m. as they host the Rams of Springfield Technical Community College.

This page developed and maintained by CCRI Athletics. Send comments and suggestions to ksalisbury@ccri.edu.